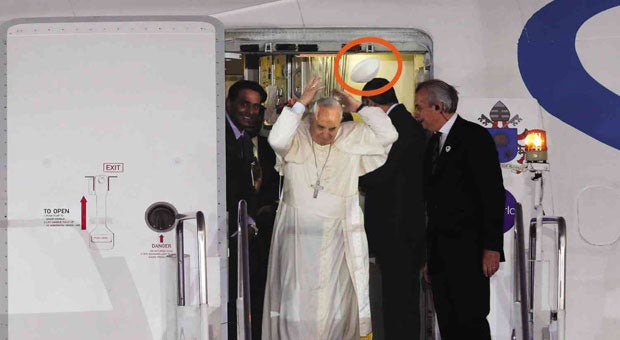 SYMBOLIC A gust of wind blows away the white cap off the head of Pope Francis as he prepares to descend the steps of the Sri Lankan plane that brought him to Manila from Colombo. EDWIN BACASMAS

MANILA, Philippines–A bird flew, which was natural. But a skullcap?

Seconds after Pope Francis appeared at the top of the plane’s steps, a gust of wind abruptly kicked up and blew away his white skullcap.

Francis grabbed his skullcap—a futile effort, as it was already long airborne—then smiled and descended the steps to begin his visit to the Philippines.

As he took his first steps on Philippine soil, a white bird flew over the media bleachers a good hundred meters away. Francis must have seen it, too. He smiled and went on his way and was promptly “lost” in an estimate of the welcome throng that ranged from a million to 3 million.

Church bells tolled across the country as the Sri Lankan Airlines Airbus A340-300 that carried the leader of the world’s 1.2 billion Catholics from Colombo, Sri Lanka, touched down at Villamor Air Base in Pasay City at 5:31 p.m. Wednesday.

On his first apostolic visit to the Philippines, Francis received a rousing, thumping hip-hop welcome from 1,200 youngsters that drew the flight attendants from the plane out onto the stairwell to watch.

Well-wishers led by President Aquino welcomed the Pope at the foot of the ramp as tens of thousands of Filipinos at the air base and on the streets along his motorcade route waved tiny Vatican and Philippine flags.

Millions more who had been anticipating the papal visit for months watched the arrival on television in their homes.

The “Pope of the Masses” was finally here and the Filipinos, known for their deep Catholicism and piety, could not get enough of him.

After the ceremonies on the tarmac, Francis began the slow-walk to his popemobile and was greeted by Mark Angelo Balberos, 10, and Lanie Ortillo, 9, who came from a house for street children to welcome him with a bouquet of flowers.

In a touching moment, the Pope hugged the children and handed each a rosary.

“I just greeted him, ‘Welcome, Pope Francis.’ And he said, ‘Yes, bienvenido,’” Ortillo later told reporters. “As we hugged I prayed that he would be able to help countless children like me,” she said.

“He didn’t say anything. He just hugged me,” the boy said. “I was very happy. It was the first time I hugged him. It was like hugging my entire family.”

The boy said he would take care of the rosary given to him by the Pope.

Toward the end of the walk from the plane, Francis got back his skullcap as President Aquino introduced him to members of his Cabinet.

With the President were Vice President Jejomar Binay, Executive Secretary Paquito Ochoa Jr., and 10 Cabinet secretaries, who kissed the hand of the Pope.

As the introductions went on, young performers twirled, waved white flags, chanted and jumped before opening blue, red, white and yellow umbrellas to form a Philippine flag as they danced to the tune of the upbeat “Piliin mo ang Pilipinas.”

With swift movements, they clapped their hands and pumped their open hands in the air as they danced to the reggae “Kapayapaan” (Peace), signifying that the Pope’s visit brings peace to a country often struck by fierce storms and big earthquakes.

Smiling broadly, Francis waved to them.

Then 158 schoolgirls and boys swayed to the tune of “Sayaw ng Pagbati” (Dance of Welcome), a hymn sang by parishioners of Parañaque for the Risen Christ on Easter Sunday.

“We are a people of joy, and the best way to show the joy is we dance, we sing,” Mercado told reporters earlier.

“It’s a grand welcome to Christ who is represented to us in the person of the Pope,” he added.

After the introductions, Francis boarded his white, open-sided popemobile and his motorcade began rolling along the 11-kilometer route to the Apostolic Nunciature on Taft Avenue, in Manila’s Malate district, where he would stay during his four-day apostolic visit.

Tens of thousands of people called his name and snapped pictures from behind concrete barriers topped by iron fencing and guarded by policemen along the entire stretch in a trip beamed live on television nationwide. Francis constantly shifted from left to right, smiling and waving.

The Vatican’s spokesman, Fr. Federico Lombardi, told reporters later that the Pope was “very impressed” about the warm welcome he received from the Filipino people.

The government has declared national holidays during the Pope’s visit, which runs through Monday. He will be in the capital, Manila, and fly on Saturday to Leyte province, where he will have lunch with survivors of the 2013 earthquake in Bohol province and of Supertyphoon “Yolanda” (international name: Haiyan), which left more than 6,300 people dead and 4 million others homeless when it struck Eastern Visayas on Nov. 8 that year.

The meal with the survivors will show the Pope’s “deep concern for our people who have gone through devastating calamities, especially in the Visayas,” the CBCP said in a pastoral letter last year.

“He comes to confirm us in our faith as we face the challenges of witnessing to the Joy of the Gospel in the midst of our trials,” the bishops said.

Cardinal Tagle said he hoped the visit by Francis would be festive and spiritually uplifting and nurture compassion at a time when the country was still recovering from recent deadly disasters, including Yolanda.

“It’s like a big, big, big, big national fiesta,” a beaming Tagle said in an interview on the eve of the Pope’s arrival.

The visit, he said, “comes at that point when people would really be helped by a moral and spiritual boost coming from someone who really cares.”

On Thursday night, after the papal motorcade, Malacañang thanked the public for following the security measures put together to ensure the safety of the Pope, with the government’s head of security for the papal visit appealing to the people to show the same orderly conduct throughout the Pontiff’s four-day visit.

“We thank our countrymen for their cooperation in warmly welcoming His Holiness and appeal again for the same gesture, conduct and cooperation for the next four days,” Emmanuel Bautista said in a text message to the Inquirer.

In a separate statement, presidential spokesman Edwin Lacierda thanked those who “participated in the arrival activities, as well as the thousands who lined the streets, for their cooperation.”

“We hope that the same kind of warmth and discipline will remain the norm for the rest of the visit of His Holiness,” Lacierda said.

Lacierda urged the public to “continue to heed the advisories issued by the authorities” as they participate in the next papal events.

“Together, we can ensure the safety of Pope Francis and of all our fellows who will be attending the events in the coming days,” Lacierda said.

Francis will meet Friday with President Aquino, who has waged a campaign against poverty, an issue close to the Pope’s heart, but has clashed with Catholic leaders over a reproductive health bill that promoted use of artificial birth control.

Congress, which is dominated by Aquino’s allies, passed the bill in 2012.

Meetings with Filipino families, Catholic Church leaders and the youth were also slated.

The Pope’s trip has given the government daunting security challenges, including an outdoor Mass in Rizal Park on Sunday that officials say could draw a record 6 million people.

About 50,000 policemen and soldiers have been deployed to secure the Pope despite the absence of threats against him, according to security officials.

Director Carmelo Valmoria, chief of the National Capital Regional Police Office, thanked the public for respecting the police and observing the strict security measures set by the government.

“The people really followed the rules. They listened to our safety reminders,” Valmoria told the Inquirer.

Valmoria said 1,000 police officers were deployed around the Apostolic Nunciature to protect the Pope.

The military, too, heaved a sigh of relief after the Pope safely arrived at the nunciature just before 7 p.m.

“It was very peaceful,” he said.

He said the crowds, including the soldiers who were deployed in Manila, were “cheering the Pope with gusto and so much fervor.”