This is what Mark Angelo Bartolas, 10, and Lanie Ortillo, 9, will say as they hand the welcoming flowers to Pope Francis upon his arrival at Villamor Airbase Thursday evening.

The children who were chosen to welcome His Holiness came from Tuloy sa Don Bosco, a foundation for abandoned children.

Bartolas said their inclusion in the welcoming committee was “a call of God.”

“I will give the flowers to Pope Francis later,” Bartolas said in Filipino. Pope Francis’ saintly namesake was fond of flowers. 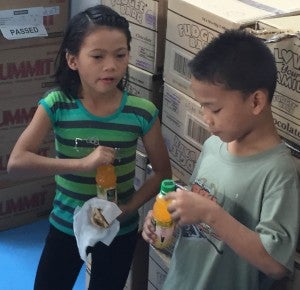 The children who will welcome Pope Francis upon his arrival in the Philippines. INQUIRER.net/Bong Lozada

Bartolas  looked in awe with the number of people who wanted to talk to him.

“I’m so happy that I have the opportunity to see Pope Francis up close,” Bartolas said.

A composed Ortillo said she would like to give the charismatic leader of the Catholic Church a tight embrace.

“I want to hug him later,” she said as she motioned a tight embrace and grinned.

Bartolas and Ortillo are children of parents who are not capable of taking care of them properly. Their foster home is in Alabang, Muntinlupa.

Bartolas said he wants to see his mother who lives in Quezon City.