Sri Lanka’s first saint was disguised as a beggar 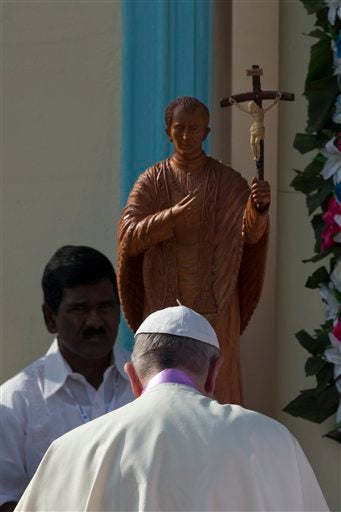 Pope Francis prays in front of a statue of the new saint Joseph Vaz, during his visit to Our Lady of Madhu shrine, in Madhu, Sri Lanka, Wednesday, Jan. 14, 2015. Pope Francis traveled to the jungles of war-torn northern Sri Lanka on Wednesday to show solidarity with the victims of the country’s 25-year civil war and urge forgiveness and reconciliation “for all the evil which this land has known.” (AP Photo/Alessandra Tarantino, Pool)

Pope Francis, who has charmed his way into the hearts of millions of Catholics worldwide for his humility, love for the poor, and modest choices, on Wednesday canonized Joseph Vaz, an Indian-born priest who dressed up as a beggar or as a bangle vendor so he could proceed with his ministry and evade getting arrested by Dutch colonizers.

Despite threats from Dutch Calvinists who ruled the island-nation of Ceylon (Sri Lanka’s old name) from 1656 to 1796, Vaz continued his work to minister the Catholic community there.

Three centuries after his death, Vaz was canonized by Pope Francis in a ceremony attended by more than half a million people.

Pope Francis, in his sermon during the canonization ceremony, praised the sacrifices Vaz had to endure because of his ‘great love (for the) people.”

“Saint Joseph Vaz came to this island inspired by a great love of its people. Because of religious persecution, he dressed as a beggar performing his priestly duties in secret meetings of the faithful, often at night,” Pope Francis said.

“His efforts provided spiritual and moral strength to the beleaguered Catholic population. He had a particular desire to serve the ill and suffering. His ministry to the sick was so appreciated by the king during a smallpox epidemic in Kandy that he was allowed greater freedom to minister. From Kandy, he could reach out to other parts of the island. He spent himself in missionary work and died exhausted at the age of 59,” he added.

And while he is facing different challenges from the ones encountered by Vaz during his time, His Holiness said that until today, Vaz remains a model for leaders and followers of the Catholic Church.

“I pray that, following the example of Saint Joseph Vaz, the Christians of this country may be confirmed in faith and make an ever greater contribution to peace, justice and reconciliation in Sri Lankan society,” Francis said during the canonization.

Pope Francis left Sri Lanka midday Thursday and is scheduled to arrive in the Philippines at 5:45 p.m. of the same day. With reports from the Associated Press and Sri Lanka’s The Island.