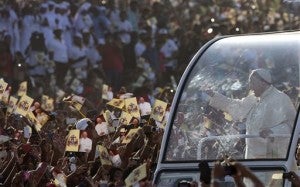 in Colombo that was attended by more than a half-million people.
Here are three things about the new saint:

— Vaz, a 17th century missionary to Sri Lanka from what was then the Portuguese colony of Goa, sometimes worked in secret, dressing up as a laborer or beggar so he wouldn’t be arrested by the island’s hard-line Calvinist colonial rulers.

— Catholic tradition says Vaz miraculously brought rain to the independent kingdom of Kandy, in central and eastern Sri Lanka, during a major drought. As a result, Kandy’s king gave Vaz protection and allowed him to work there openly.

Vaz was actually born an Indian in 1651 in what was then the Portuguese colony of Goa. He spent 23 years ministering to the Catholic community in Sri Lanka.

Today, Goa is an Indian state famous for its centuries-old churches, beautiful beaches and hordes of tourists. Catholics still make up about one-quarter of Goa’s population of 1.5 million. On Wednesday, bells will toll in the state’s churches and cathedrals at the time of Vaz’s canonization, church officials said.

Manuel Ubaldo Dias, a Goa church official, said prayers to commemorate the sainthood would also be held there on January 16, the day traditionally celebrated in Vaz’s honor.

“This is a great day for us. Something we have been waiting for years,” Dias said.

In canonizing Vaz, Pope Francis again proved he has little tolerance for pointless rules as he skirts the Vatican’s normal saint-making regulations. While the church traditionally requires two miracles for sainthood, the Vatican never confirmed a second attributed to the intercession of Vaz.

Rather, Francis simply signed off on a decision taken by the Vatican’s saint-making office that Vaz warranted canonization. It’s the same thing Francis did for a far better-known new saint, Pope John XXIII, and is a sign that Francis firmly believes that the faithful need more models of holiness without the technical, time-consuming and costly process of confirming inexplicable miracles.

— Exemplary priest: “He teaches us how to go out to the peripheries, to make Jesus Christ everywhere known and loved.”

— Transcending religious divisions: “His example continues to inspire the Church in Sri Lanka today. (The Church) gladly and generously serves all members of society. She makes no distinction of race, creed, tribe, status or religion.”

— Missionary zeal: “I pray that, following the example of Saint Joseph Vaz, the Christians of this country may be confirmed in faith and make an ever greater contribution to peace, justice and reconciliation in Sri Lankan society.”

The crowds poured off buses and from the nearby railway station. Security was tight, and everyone had to walk the last few hundred meters (yards), but the feel was festive, and taxi drivers were handing out free cups of tea.

Sure you could stay home and watch it all in comfort. But that, they said, could not capture the feel of being there in person.

“With today’s advanced technology, you can see him on television and on the Internet,” said Kolitha Fernando, a retired clerk from the hill town of Kandy. “But to see him with your naked eyes, that’s a great feeling and a privilege for a Catholic.”

Hundreds camped out overnight on the oceanfront field where the service will be held, spending the night under the stars.

For 21-year-old hairdresser Rosemary Barbara Carter, the discomforts of a night on hard ground were a small price to pay for what she hoped to gain.

Catholics make up slightly more than 6 percent of Sri Lanka’s population of 21 million, according to the government. They are by far the largest Christian denomination in the country. Other Christians make up just 1.3 percent of the population, which is mostly Buddhist.