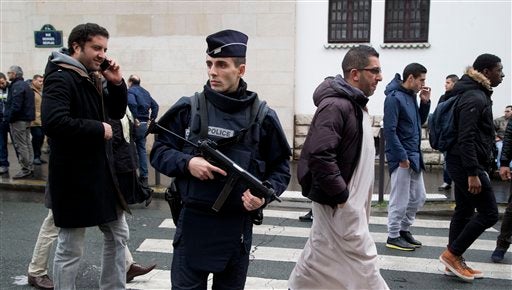 A French police officer stands guard outside the Grand Mosque as people arrive for Friday prayers, Paris, on Jan. 9, 2015. French security forces are on alert after terrorists attacked satirical newpaper Charlie Hebdo in Paris. Later on Friday, police released Mourad Hamyd, 18, who was first described as “the third suspect” in the assault that killed 12 people. AP

CHARLEVILLE-MÉZIÈRES, France – Mourad Hamyd describes himself as a normal 18-year-old who lives with his parents but on the day France was gripped by the Charlie Hebdo massacre, he became known as “the third suspect” — even though he was in class at the time of the shooting.

The brother-in-law of one of the two gunmen turned himself into police on Wednesday, horrified and baffled to hear his name circulating in the news and on social media.

But the teenager was released without charge on Friday evening, relieved but badly shaken.

“I was stunned, completely overwhelmed by the events but the police officers were very correct with me,” the visibly tired high school student told AFP in the presence of his lawyer Marie Calleghaer and several family members.

Numerous witnesses verified he was in school when brothers Cherif and Said Kouachi gunned down 12 people at the Paris office of the satirical magazine Charlie Hebdo, kicking off three days of violence that left a total of 17 people dead and traumatized a nation.

“I’m in shock, people said horrible and false things about me on social media even though I am a normal student who lives quietly with his parents,” said the bespectacled teenager who one day hopes to study medicine.

“The attack was horrific and my thoughts are with the victims,” he added.

After a massive manhunt, the Kouachi brothers were killed in a dramatic police standoff on Friday.

It remains unclear how Hamyd, who until this week was completely unknown to the police, became linked to the magazine attack.

But as he reflected on his name appearing in news reports and online posts across the world, he said he feared the wrongful accusation would haunt him for years to come.

“I only hope this won’t taint my future,” he said.

“I have nothing to do with this whole thing, Cherif is just my brother-in-law with whom we have a fairly distant relationship,” he said, adding that Cherif lived in the Paris region and rarely visited his northern home town.

Hamyd’s sister, who is married to Cherif, was taken into custody on Wednesday and freed on Saturday.

“I am sure she is also innocent,” an unnamed relative told AFP.

As France prepared for a huge march in Paris in honour of the victims on Sunday, Hamyd’s family told AFP they would attend a rally in their town of Charleville-Mezieres to pay their own tribute.

But Hamyd, hoping to fade back into anonymity as soon as possible, won’t be joining them.

French weekly has history of angering Muslims with cartoons