MANILA, Philippines–The image of the Black Nazarene was framed in a timely backdrop as it passed National Museum in Manila around 2 p.m. on Friday. 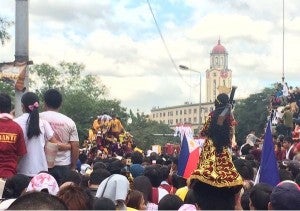 A 1937 painting was reprinted on tarpaulin and put up in the area. The reproduction of “Black Nazarene of Quiapo” by Ricarte Puruganan included the words: “Viva Señor Jesus Nazareno.”

The ebony-hued statue passed by the National Museum around 2 p.m. as it inches its way to Quiapo Church. It is on its way to Manila City Hall then on to Jones Bridge. It started its slow journey from the Quirino Grandstand past 8 a.m.

Police set the crowd estimate at the start of the procession at one million. A devotee died of cardiac arrest during the parade.

Around 3,500 police were deployed to secure the Black Nazarene feast, also known as the “traslacion,” an annual event in the predominantly Catholic country. 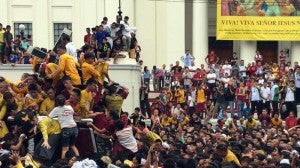 The ebony-colored statue of Jesus was brought to Manila by Augustinian priests in 1607. It is said that it got its color after it got burnt in a fire that hit the Spanish galleon carrying it.

The procession commemorates the first parade transferring the statue from a church in Intramuros to Quiapo Church on January 9, 1767.

Devotees of the Nazarene

Look up to God in humility, Tagle tells Nazarene devotees