Look up to God in humility, Tagle tells Nazarene devotees 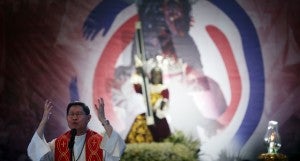 Manila Archbishop Luis Antonio G. Cardinal Tagle gives his homily at the midnight Mass during the start of feast and traslacion of Black Nazarene at the Quirino Grandstand in Manila. EDWIN BACASMAS/INQUIRER

MANILA, Philippines–Manila Archbishop Luis Antonio Cardinal Tagle on Friday urged the devotees of the Black Nazarene to turn to a life of humility and spirituality.

“Look up to God, look back and bow down to Him. Let’s make it a pattern of life of spirituality,” Tagle said in his homily during the midnight Mass for the feast of Black Nazarene at the Quirino Grandstand in Manila.

“A true devotee is one who look up, look back and bow down to God, knowing fully well that without Him, he is nothing,” he added.

According to Tagle, looking up, looking back and bowing down to God are simple ways by which devotees could deepen their devotion to the highly revered black image of Christ that is believed to be miraculous.

“Those who will look up to God will have an everlasting life, that’s the promise of the Gospel. The most beautiful way to look up is to look at God,” Tagle said in the vernacular.

“We look back to God who is the source of all our blessings. That is why many devotees are here year after year, rain or shine, barefoot, some are even in wheelchairs. They never forget, they look back to the giver of blessings and good experiences,” he added.

To bow down to God is a sign of humility, Tagle said.

“We are all sinners and to bow down to God is an admission of our sins. It’s like saying we cannot brag or boast about anything,   except the fact that we need Him, that’s all,” he said.

“And to bow down is like imitating Jesus, who, despite being the son of God, humbled himself and became man to be with us. He carried our cross and died. That was his way of showing humility, all just because he loves us and he wanted to save us,” the cardinal said.

“Let this be a challenge to all of us–look up, look back and bow down to God. And may we be able to do this to honor our beloved Jesus of Nazarene and help others especially those who have less or nothing in life, those who are in need most of our mercy and compassion,” Tagle said.

Devotees of the Nazarene