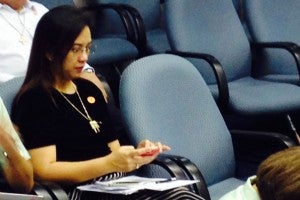 ROMBLON, Philippines—Former Iloilo Representative Janette Garin is poised to become the next Health secretary after President Benigno Aquino III said on Friday that only “ministerial stuff” are left to formalize her appointment.

“I am very satisfied with Sec. Garin. We will be putting in another undersecretary to help her. And of course, this is subject to confirmation by the Commission on Appointment,” President Aquino told reporters in an interview here.

Garin was standing right behind the President during the press conference and tried to hide behind Mindoro Oriental Rep. Rey Umali.

President Aquino said that Garin’s appointment would be in order following the Papal Visit on Jan. 15 to 19.

“Perhaps we will deal with a lot of ministerial stuff after the Pope’s visit. Maybe the urgent matters will be attended to now but those that can wait a little so as not to distract the people who will be working on the Pope’s visit,” the Chief Executive said.

Garin is an undersecretary at the Department of Health (DOH) but was named by Aquino as acting DOH chief in late October after he asked then Sec. Enrique Ona to go on a one-month leave.

The President himself said he wanted to give Ona time to put together his explanations to various issues raised against the former secretary, the most prominent of which was the department’s alleged questionable purchase of anti-pneumonia vaccines.

Asked if he was still willing to meet with Ona, the President answered in the affirmative.

“Of course I’ll talk to him. But I am still awaiting the completion of all of the investigations that he has done so that our meeting will have a point, will have a conclusion,” Aquino said.

On Dec. 19, 2014, Aquino officially accepted Ona’s resignation more than a month after he went on leave.

Garin, on the other hand, received criticisms late October for visiting quarantined peacekeepers from Ebola-stricken Liberia without wearing any protective gear.

The President visited Romblon for an aerial inspection of the Romblon-Sawang-Agpanabat provincial road and the ceremonial inauguration of new buildings of the Romblon provincial hospital. With a report from Kristine Angeli Sabillo, INQUIRER.net

Ona: Loss of Aquino’s confidence prompted me to quit