DOTC exec says improvements in MRT, LRT to be felt by commuters late 2015 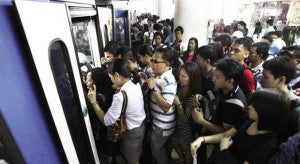 MANILA, Philippines–The riding public will feel the improvement in the Metro Rail Transit (MRT) and Light Rail Transit (LRT) due to the fare hike on the third quarter of 2015, a Department of Transportation and Communication (DOTC) official told lawmakers on Thursday.

“It will not be immediate. These repairs will take time. A lot of improvement will be seen in the third or fourth quarter of 2015, and more so in 2016,” Undersecretary for Planning Rene Limcaoco said during the House of Representatives transportation committee hearing on the fare hike.

He said the fare hike is needed to implement the innovations for the MRT and LRT.

In a presentation, MRT-3 officer-in-charge Renato San Jose said government is expected to rake in more than P2 billion in revenues from the fare hike–P942 million from LRT 1 and 2 and P1.122 billion from MRT.

DOTC Undersecretary Jose Lotilla said in the case of the MRT, the revenue from the hike intends to offset government subsidy for the monthly fees paid to private concessionaire MRT Corporation (MRTC) in a build-lease-transfer deal.

Under the 25 year build-lease-transfer contract, the government needs to pay 15 percent in equity rental payment to MRTC, the private company mandated to handle the maintenance of the railway system.

(So that the government’s expenses can be eased. The government does not rely solely on the commuters’ payments.)

Bayan Muna Representative Neri Colmenares criticized DOTC for succumbing to the contract with the MRTC, which he said has resulted in exorbitant costs from government.

He said because of the contract, the riding public will be made to pay for the government’s debts to MRTC through the fare hike.

(That’s the reason why the expenses are rising—because of the equity rental with concessionaires. The government is subsidizing the private concessionaire, not the people.)

When asked by Colmenares if he thinks the contract with MTRC is unfair, Lotilla said: “It leaves much to be desired.”

Meanwhile, Bagong Alyansang Makabayan Secretary General Renato Reyes said government should look at public transport as an investment instead of a waste of resources.

“Ang subsidy sa commuters ay hindi kasayangan (The subsidy given to commuters is not a waste). It must be seen as a public investment,” Reyes said.

The increase in fare hike comes amid the need to upgrade the country’s elevated railway systems, which have been in operation for decades and have become prone to constant breakdowns. The MRT has been in operation since 1999, LRT 1 since 1984, and LRT 2 since 2003.

In the case of MRT, the revenues would be deposited in escrow to pay the monthly dues for MRTC instead of to improve the railway, DOTC Secretary Joseph “Jun” Abaya has said.

Before the fare hike, government subsidized P41.56 for each MRT passenger who only paid P12.40 in average fare. The actual cost of fare was at P53.96.