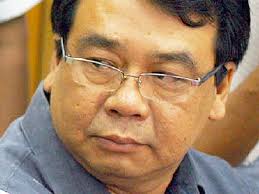 MANILA, Philippines—A militant solon criticized Department of Transportation and Communications (DOTC) for pushing a fare hike even if it had already asked for funds for the repair and rehabilitation of the Metro Rail Transit (MRT) and the Light Rail Transit (LRT) in the approved 2015 budget.

Bayan Muna Representative Neri Colmenares said the DOTC resorted to treachery when it implemented the fare hike shortly after Congress had approved its budget.

“For me, there is treachery because it waited for Congress to pass the budget before it increased the fare for rehabilitation and repair,” he said.

Colmenares said in the 2015 General Appropriations Act (GAA), DOTC asked Congress P977.69 million for the LRT 1 and 2 repair and rehabilitation.

It also asked for P2.569 billion for the MRT rehabilitation in the GAA, as well as P957 million in the supplemental budget.

“Humingi kayo ng budget for that. Now you increased the fare for the same thing you asked the budget for?… For me, there is treachery here,” Colmenares said.

(You asked for a budget for (the rehabilitation and repair). Now you increased the fare for the same thing you asked the budget for?)

DOTC Undersecretary Jose Lotilla said the funds are very much needed because of the poor condition of the railway systems which have been operating for decades already.

(There are still so much to be done. The railways are already old.)

He added that in the case of the MRT, the revenue from the hike will be used to offset at least P2 billion subsidy and pay for rental fees paid to the private concessionaire under a build-lease-transfer agreement.

The DOTC had announced that the new base fare would be P11 and an additional P1 per kilometer.

DOTC Secretary Joseph “Jun” Abaya had said that the fare hike would be used to offset at least P2-billion government subsidy and would be deposited in escrow to pay the monthly dues to the private owner instead of improving the railway.