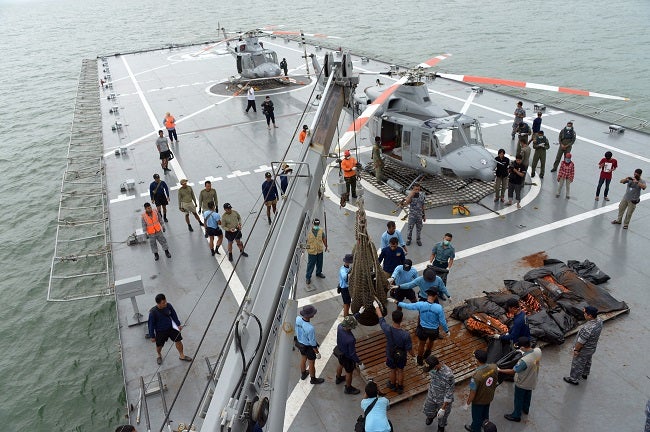 Indonesian’s Navy personnel prepare the dead bodies of the passengers of AirAsia Flight 8501, on Indonesian navy vessel KRI Banda Aceh, to transfer them by helicopters at sea off the coast of Pangkalan Bun, Indonesia, Saturday, Jan. 3, 2015. AP

JAKARTA, Indonesia—Weather was the “triggering factor” in the fatal crash of AirAsia Flight 8501 a week ago, with icing likely causing engine damage, according to Indonesia’s meteorological agency.

The Airbus A320-200 crashed during a storm en route from Indonesia’s second city Surabaya to Singapore, and relief workers are hunting for flight data recorders to determine the cause of the crash.

But an initial report on the website of BMKG, Indonesia’s meteorological agency, suggests the weather at the time the plane went down sparked the disaster after it appeared to fly into storm clouds.

“Based on the available data received on the location of the aircraft’s last contact, the weather was the triggering factor behind the accident,” said the report.

“The most probable weather phenomenon was icing which can cause engine damage due to a cooling process. This is just one of the possibilities that occurred based on the analysis of existing meteorological data,” it said.

Before take-off, the pilot of Flight 8501 had asked for permission to fly at a higher altitude to avoid the storm, but the request was not approved due to other planes above him on the popular route, according to AirNav, Indonesia’s air traffic control.

In his last communication, Captain Iriyanto, an experienced former air force pilot, said he wanted to change course to avoid the menacing storm system. Then all contact was lost, about 40 minutes after the plane had taken off.

Major parts of the Airbus A320-200 were found in the sea off the island of Borneo late Friday and Saturday, raising hopes that the remaining bodies and the crucial “black box” recorders would soon be located. So far 30 bodies have been found.

High seas throughout the week have hampered the relief process, a huge operation assisted by several countries including the United States and Russia, but divers were preparing to go down to the wreckage Sunday as the weather cleared.

“The waves are calmer, only one to two meters (three to seven feet) high,” search and rescue official S.B Supriyadi told AFP, adding that 95 divers were on standby on various ships.

“We’ll be concentrating on the underwater search, hopefully we’ll be able to evacuate more bodies. We want to speed up the evacuation of bodies which might be stuck inside the plane’s body,” he said.

He said they would be using sonar equipment in their underwater searches, while aircraft would continue to scour the sea and coastline.

Indonesia has pledged to investigate flight violations by AirAsia, saying the ill-fated aircraft had been flying on an unauthorized schedule when it crashed. The airline has now been suspended from flying the Surabaya-Singapore route.

The transport ministry said AirAsia Indonesia had not been permitted to fly the route on Sundays and had not asked to change its schedule, but the Civil Aviation Authority of Singapore said it had granted permission for the airline’s Sunday flight.

It was unclear how the airline, a unit of Malaysia-based AirAsia, had been able to fly without the necessary authorization from its starting point.

The company has declined to comment until the probe is complete, but said it would “fully cooperate” with the government.

Of the 162 passengers and crew on board, 155 were Indonesian, with three South Koreans, one Singaporean, one Malaysian, one Briton and a Frenchman — co-pilot Remi Plesel.