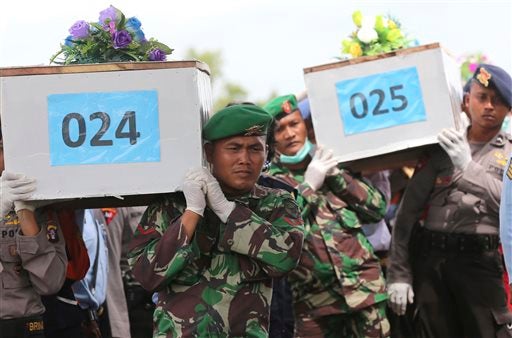 Members of the National Search and Rescue Agency carry coffins containing bodies of the victims aboard AirAsia Flight 8501 to transfer to Surabaya at the airport in Pangkalan Bun, Indonesia, Saturday, Jan. 3, 2015. AP

SINGAPORE — Leaked radar data, which still needs to be verified, paints a frightening picture of the speeds at which Indonesia AirAsia Flight QZ8501 rose and plunged.

It suggests that the cockpit, manned by Captain Iriyanto and his co-pilot Remi Emmanual Plesel, lost control of the plane due to severe weather conditions, though experts have cautioned against the unverified readings.

About 45 minutes after the Airbus 320-200 with 162 people on board left Surabaya for Singapore on Sunday morning, the pilots asked air traffic control for approval to climb from 32,000 feet to 38,000 feet in order to avoid a storm.

Approval was given for an ascent to 34,000 feet, after which air traffic control lost contact with the cockpit.

Between then and the crash, which has apparently left no survivors, the plane allegedly climbed at a rate of 6,000 feet to 9,000 feet per minute.

However, Jacques Astre, president of industry consultancy International Aviation Safety Solutions, said: “The (climb) rates sound excessive… Given the altitude and potential weight of the aircraft, such a rate of climb sounds quite excessive for the aircraft’s capability.”

An experienced A-320 pilot said: “The steepest climb is usually done after take-off, when the plane has maximum power, to reach cruise altitude and, even then, we are looking at 3,000 to 4,000 feet a minute.

Even if the pilot was trying to take the plane higher, the rate of ascent would have been beyond the plane’s capabilities.

“It just can’t be done, even if the pilot wanted to do it. Airbus aircraft are designed and built to override such extreme human intervention. That’s why pilots always say that the Airbus aircraft is an engineer’s, not a pilot’s, plane.”

If man and machine were not capable of such drastic manoeuvring, what could have caused it?

Astre said: “Could updrafts from a violent thunderstorm propel an aircraft upward at a violent rate? Yes.”

A report put together by a team from Indonesia’s meteorological agency, led by Professor Edvin Aldrian, said that weather conditions in the area where QZ8501 was last spotted were severe, with thick cumulonimbus clouds as high as 45,000 feet.

Such clouds can produce lightning and other dangerous weather conditions, such as gusts and hail, as well as the formation of ice on control surfaces.

This can freeze the aircraft’s critical systems with disastrous results, similar to what happened in June 2009 when Air France Flight AF447 plunged into the Atlantic Ocean during a flight from Rio de Janeiro to Paris.

Investigations concluded that the aircraft crashed after pilots failed to react correctly to temporary inconsistencies between air speed measurements, likely because ice crystals had blocked the plane’s pitot tubes that measure air speed.

There is also speculation that Flight QZ8501 could have made an emergency landing on water before choppy seas and high waves sank the aircraft.

Experts say this is very unlikely given that, in such a situation, the cockpit would have had time to send out a distress signal, and none was ever sent.

The fact that bodies have been found intact does not mean that those on board necessarily survived the impact when the plane hit the ocean.

Astre, a former air accident investigator, said: “I investigated an accident once where a small aircraft hit the water nose-first from several thousand feet of altitude. The pilot’s body was recovered intact in so far as it was in one piece, but a human could not survive the impact and the trauma was extensive.”

Another pilot said: “If the data is accurate and the plane was coming down at 11,000 feet per minute, it would have hit the ocean in about three minutes. By that time, everyone would have been knocked out.”

Astre said of the reports so far: “Radar can provide some valuable clues, particularly with regard to descent rates, but it does not provide a complete picture. The black boxes – flight data recorder and cockpit voice recorder – will provide some of the most vital information, together with radar and other information.”