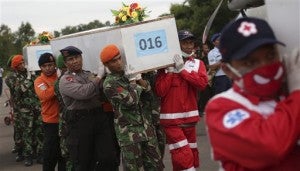 Members of the National Search And Rescue Agency and Indonesian soldier carry coffins containing bodies of the victims aboard AirAsia Flight 8501 to transfer to Surabaya at the airport in Pangkalan Bun, Indonesia, Friday, Jan. 2, 2015. The investigation into the AirAsia crash has turned to the ocean floor, with more sonar equipment and metal detectors deployed today to scour the seabed for wreckage, including the plane’s black boxes. (AP Photo/Achmad Ibrahim)

Flight 8501 crashed into the Java Sea with 162 people on board en route from Indonesia’s second largest city Surabaya to Singapore early Sunday, at a flight time that had not been cleared by officials, said director general of air transport Djoko Murjatmodjo.

“It violated the route permit given, the schedule given, that’s the problem,” he told Agence France-Presse.

“AirAsia’s permit for the route has been frozen because it violated the route permit given.”

He said the permit would be frozen until investigations were completed.

A statement from transport ministry spokesman J.A. Barata said AirAsia was not permitted to fly the Surabaya-Singapore route on Sundays and had not asked to change its schedule.

Search teams have narrowed their hunt for the plane’s fuselage and remaining bodies from the crash of the Airbus A320-200, with foreign investigators helping to pinpoint its black boxes, crucial to determining the cause of the crash off the island of Borneo.

Rough weather has in recent days hampered the search for the plane, which is believed to be in relatively shallow water of around 25-32 metres (82-105 feet). So far 30 bodies and various items of debris have been recovered.

The families of victims have been preparing funerals as the bodies recovered are identified in Surabaya, where a crisis centre has been set up at a police hospital with facilities to store 150 bodies.

Before take-off, the pilot of Flight 8501 had asked for permission to fly at a higher altitude to avoid a storm, but the request was not approved due to other planes above him on the popular route, according to AirNav, Indonesia’s air traffic control.

In his last communication shortly before all contact was lost, he said he wanted to change course to avoid the menacing storm system.