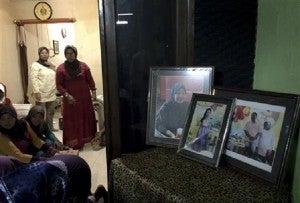 In This Thursday Jan. 1, 2015 photo, framed pictures, from left, of Soemanik Saeran, 64, Naura Kanita Rosada Suseno, 9, and Djoko Suseno, 43 with his wife Hayati Lutfiah Hamid, 39, are displayed in the home of Soemanik where relatives and friends have gathered for nightly prayers, in Surabaya, Indonesia. AP

SURABAYA, Indonesia—At the muddy gravesite where Hayati Lutfiah Hamid was buried, something was missing. Though around 150 villagers had gathered to lay the first identified victim of AirAsia Flight 8501 to rest, the people who would mourn her most were not there.

Her husband, Djoko Suseno, 9-year-old daughter, Naura Kanita Rosada Suseno, and mother-in-law, Soemanik Saeran, are all still missing in the Java Sea after their plane went down Sunday, killing all 162 people on board.

Hayati’s body was handed over to her family in a dark casket Thursday evening, and in accordance with Islam buried immediately.

All week, in Soemanik’s simple village house on the outskirts of Surabaya, relatives and friends have sat on prayer mats laid at the porch for their nightly intercession. Prayers that their loved ones would be found alive have given away to prayers that their bodies will be recovered quickly.

The plane crashed about halfway between Surabaya and Singapore, its intended destination. Hayati, 39, had planned the year-end excursion to Singapore and Malaysia for months as a treat for her daughter and mother-in-law. It was their first trip abroad.

“We are thankful that Hayati’s body has been recovered but we are still fraught with worry because up to this point, three more of our family members are still missing,” Masykur, the husband of Djoko’s sister, said Thursday. “We will pray every night until they are found.”

Masykur, said his two sons, in their early 20s, were supposed to join the group on the trip but they both skipped it as they were bogged down with college studies.

“We are extremely saddened by their deaths but we are thankful to Allah that my two sons didn’t go on the trip,” he said at Soemanik’s family home.

Hayati was buried near the house, though her home is in another Surabaya suburb, so that the entire family can be laid to rest in the same cemetery once their bodies are found, family members said.

Hayati is the youngest of four children. Her parents have passed away and an older sibling also died earlier of cancer.

Unang Priyatino, a school friend of Hayati’s, said he last saw her in October. Hayati, known by her nickname, Fifi, had bought him a prayer mat as a gift after returning from performing hajj in Mecca. She went alone and had planned to repeat the pilgrimage this year with her husband and mother-in-law, he said.

“Fifi is a humble and caring person. We have known each other for more than 20 years. She loves shopping, especially shoes,” Unang said. Hayati has a collection of more than 100 pairs of shoes in her house, he said.

At Soemanik’s family home, a small table placed outside at the corner of the house held three large picture frames: a portrait of the matriarch, one of Hayati and her husband, and one of Nauru posing in a purple gown at her 9th birthday party.

AirAsia plane with 162 onboard missing in Indonesia