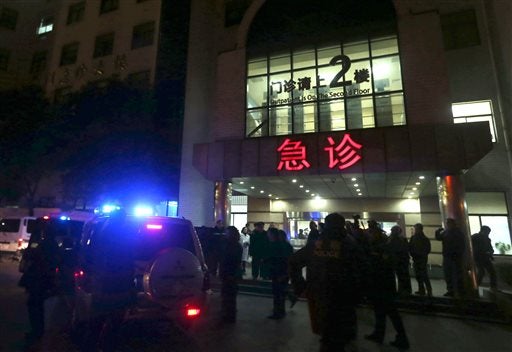 In this photo released by China’s Xinhua News Agency, medical workers stand outside the emergency ward of the No. 1 People’s Hospital of Shanghai after a stampede caused casualties among people who took part in New Year’s celebrations in Shanghai, early on Thursday, Jan. 1, 2015. AP PHOTO/XINHUA, DING TING

SHANGHAI—People unable to contact friends and relatives streamed into hospitals on Thursday, anxious for information after a stampede during New Year’s celebrations in Shanghai’s historic waterfront area killed 36 in the worst disaster to hit one of China’s showcase cities in recent years.

Some witnesses said revelers had scrambled for fake money thrown from a building. Others downplayed the likelihood that this was to blame.

The official Xinhua News Agency said the deaths and injuries occurred at Chen Yi Square, which is in Shanghai’s popular riverfront Bund area, an avenue lined with art deco buildings from the 1920s and 1930s when Shanghai was home to international banks and trading houses. The area is often jammed with spectators for major events.

A Shanghai government statement said another 47 people received hospital treatment, including 13 who were seriously injured, following the chaos about half an hour before midnight. Seven of the injured had left hospital by Thursday afternoon.

American Andrew Shainker, an English teacher, watched from a rooftop terrace across the road as the disaster unfolded on a wide stairway leading up to a riverfront promenade.

“I witnessed lifeless bodies being carried out of a crowd one by one and dumped on the street,” he posted on Chinese messaging network WeChat. “You could hear screams of panic. What I thought was the best view on the Bund ended up being a front row seat to an international tragedy.” Most of the victims appeared to be Chinese, he said.

By dawn there was little evidence of the disaster beyond a lone police van and rubbish discarded by celebrants. That is typical in China for major incident scenes, which authorities are quick to clear.

More than 20 police vehicles were outside the Shanghai No. 1 People’s Hospital, one of at least three facilities where the injured were taken, and officers prevented people from entering.

The mother of an injured 12-year-old boy sat in a chair, crying, surrounded by relatives.

“We don’t know what is happening but we can’t get in to see him,” said her older brother, declining to be named.

Xia Shujie, vice president of Shanghai No. 1 People’s Hospital, told media that some of the people brought to them were suffering from serious suffocation.

The microblog of the People’s Daily, which is run by the ruling Communist Party, said that the injured included 3 Taiwanese and one Malaysian, and that some of the dead and injured were aged between 16 and 36.

Steps lead down from the Chen Yi Square to a road across from several buildings.

Shainker was in Bund 18, a shopping and entertainment complex where witnesses said dollar-like notes had been thrown from a window, prompting a scramble to retrieve it.

“We saw people scattering money from Bund 18,” wrote one poster, but others pointed out a wide street separates the building from the staircase where the main stampede occurred.

Zhou Miaochen, who was standing near the steps, told AFP it was “impossible” for the notes to reach the crowd there.

“There was a large flow of visitors, some trying to reach the viewing deck and some trying to get down,” he said. “People started crashing into each other.”

Fake currency has long been burned at Chinese funerals to ensure the dead have money in the afterlife, and nowadays is also frequently used as an advertising medium.

Pictures posted online showed the slips of paper were a similar size, shape and color as US currency, but emblazoned with the logo of M18, a nightclub in the building, and stamped “New Year 2015.”

The stampede appeared to be near the area where, the English-language Shanghai Daily had reported last week, a “toned-down” version of the annual New Year’s Eve countdown would be held that would not be open to the public. The event, which normally attracts about 300,000 people, had been canceled, apparently because of crowd control issues.

Most large gatherings in China are carefully controlled by authorities but the country has seen other incidents in which overcrowding has caused panic and deaths.

In 1993, 20 people were killed as New Year’s revelers poured into a narrow street in Hong Kong, at the time still under British rule.