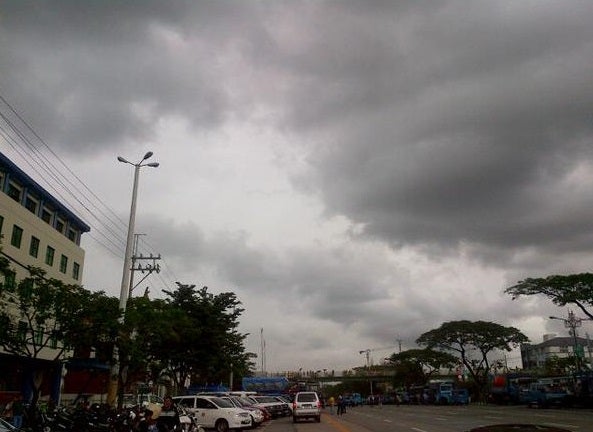 MANILA, Philippines—Even with the low pressure area, formerly Tropical Storm “Seniang,” on its way out of the country’s area of responsibility, its enhancement of the amihan (northeast monsoon) made the first day of the year rainy in most parts of Luzon, including Metro Manila.

Philippine Atmospheric, Geophysical and Astronomical Services Administration (Pagasa) forecasters said that Thursday’s drenching may be expected in the region until the weekend.

Weather forecaster Manny Mendoza said that the enhancement of the amihan, prevailing over Northern and Central Luzon, was compounded by its interaction with the tail-end of a cold front affecting the Bicol region.

“The interaction between the northeast monsoon and the tail-end of a cold front is bringing light to occasionally moderate rains in Metro Manila and other parts of Luzon,” he explained.

At 4 p.m. Thursday, Seniang (international name: Jang-mi) was estimated to be at 345 kilometers south of Puerto Princesa City.

Seniang struck the country with peak winds of 65 kilometers per hour, sparking flash floods and landslides and leaving more than 50 people dead in Mindanao and the Visayas.

The tail-end of the cold front affecting the Bicol region, Mendoza said, is expected to bring moderate to occasionally heavy rainshowers and thunderstorms over southern Luzon and eventually in some parts of the Visayas toward the weekend.

Pagasa warned of strong to gale-force winds, caused by the surge of the northeast monsoon, making the seaboards of Luzon and the Visayas dangerous for fishing boats and other small vessels with waves reaching 4.5 meters.

Moderate to strong winds will prevail over the entire archipelago where seas will be moderate to rough.

Rainy first night of 2015 over Luzon