We were in touch with LGUs even before Seniang struck – Roxas 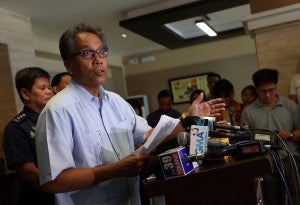 Roxas issued the statement as the death toll from the 19th weather disturbance to hit the country this year continued to climb.

As of Wednesday noon, at least 53 people have been confirmed dead according to figures provided by the National Disaster Risk Reduction and Management Council. That eclipses the 18 fatalities recorded during the onslaught of Typhoon Ruby (International name: Hagupit) in early December.

Ruby, which barrelled through the same places ravaged by Supertyphoon Yolanda in November 2013, was the strongest cyclone to enter the country in 2014.

Roxas assured residents displaced by Seniang that the national government agencies concerned were ready to provide assistance to them.

“We observe the ‘whole of government approach’ even during the holiday season,” he said.

He said he had ordered the regional directors of the Department of the Interior and Local Government to contact the governors and mayors of provinces and towns on Seniang’s path to implement their own disaster preparedness plans.

Besides issuing a memorandum order, he said, he sent text messages to the local officials to remind them to be ready for the storm’s possible destructive effects.

“Even before the storm made its landfall last Monday, we had been coordinating with the local chief executives of the towns (affected by Seniang) in Visayas and Mindanano,” Roxas said.

According to Roxas, the government has already come up with a “standard operating procedure” or a system that the local chief executives as well as the officials of the Philippine National Police, Bureau of Fire Protection and the Department of Social Welfare and Development should observe in times of natural calamities.

Roxas, who has been at the forefront of the Aquino administration’s reinvigorated disaster preparedness campaign, reiterated that the governors, mayors and other local officials should be leading the government’s efforts in minimizing the adverse effects of the typhoons.

“Officials in charge of disaster preparedness should forget about their personal activities to attend to their responsibilities,” he said.