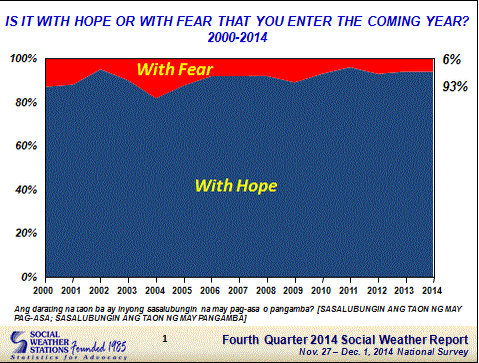 At least 93 percent of the 1,800 adults surveyed said they are entering New Year with hope than fear, according to the fourth quarter report conducted November 27 to December 1.

The pollster said New Year hope is widespread in all areas – 91 percent in Metro Manila, Visayas and Mindanao, and 96 percent in Luzon.

The pollster also noted that New Year hope is higher among those who expected a joyful Christmas this year.

Almost all or 95 percent of the 71 percent expecting a happy Christmas also look forward to the coming year.

Of the 24 percent who said Christmas would be neither happy nor sad, 91 percent see 2015 with hope.

Meanwhile, of the 6 percent expecting a sad Christmas, 76 percent were hopeful for 2015.

On the other hand, about a fourth or 24 percent of those with sad Christmas said they regard New Year with fear, compared to four percent among those with happy Christmas.

Another pollster Pulse Asia said 88 percent of 1,200 respondents or 9 in 10 Filipinos said that they are looking forward to 2015 with hope.

The survey, which was conducted from November 14-20, showed that only one percent of respondents will face 2015 without hope and 11 percent are “ambivalent” on the matter.