No formal talks with Reds yet, but Deles says mediators are busy

MANILA, Philippines – President Benigno Aquino’s adviser on the peace process, Teresita Deles, said Friday no formal meetings on the resumption of peace talks with the National Democratic Front of the Philippines have taken place but both parties were amenable to returning to the negotiating table to end more than four decades of communist insurgency in the country.

“I must state categorically that there have been no meetings between GPH (Government of the Philippines) and the NDF to discuss the possible resumption of talks. It is true, however, that friends of the process have been shuttling between the two parties to explore possible parameters for restarting talks at the earliest time possible,” Deles said in a statement released by Malacañang. 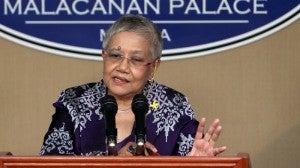 For his part, Communist Party of the Philippines founder Jose Ma. Sison remained pragmatic that the two parties would not be able to reach a final peace agreement during the Aquino administration, which will end in June 2016.

But at the very least, Sison told the Inquirer in a message, the two parties could reach agreements for social and economic reforms and a ceasefire.

The communist insurgency waged by CPP and its armed wing, the New People’s Army, is the longest running in Southeast Asia, and remains to be one of the pressing internal security problems for the Philippine government. Even before the Partido Komunista ng Pilipinas was reorganized into the Philippine Communist Party in 1968, communist rebels had been fighting the government since shortly after World War II.

The peace talks between the government and the CPP-NPA-NDFP have had a series of starts and stops, with the last breakdown taking place in February last year.

Deles said “feedback has been positive” on the possible resumption of the talks “but there remain matters to be clarified in order to ensure that, if ever we do resume talks, it will not go the same way of an early, major impasse that has happened too often in the past.”

“As we have repeatedly stated since the special negotiations track broke down in February, 2013, we want to resume talks on the basis of a doable and time-bound agenda,” Deles said. “In keeping with the spirit and hope of the Christmas season, I would like to think that Mr. Sison’s very positive remarks indicate that common ground between the two parties may indeed be broadening towards the achievement of a just and durable peace that our people desire and deserve.”