MANILA, Philippines–The traffic constable of the Metropolitan Manila Development Authority (MMDA) who was dragged by a maroon Isuzu Sportivo died Tuesday afternoon, the MMDA said in its official Twitter account.

“MMDA Traffic Constable Sonny Acosta just died. He has returned to the heavenly arms of our Lord where justice and eternal peace reign,” the MMDA said. 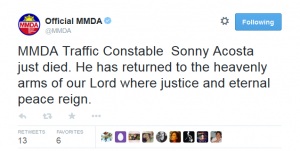 On December 19, the traffic constable flagged down an Isuzu Sportivo for being in the lane designated for provincial buses in Cubao, Quezon City.

When Acosta asked for the motorist’s license, the driver, identified as Mark Ian Libunao, supposedly rolled up his window and sped off even while Acosta’s hand was stuck in the car’s window.

Acosta’s fellow MMDA enforcers found him bloody on the ground.

He had been in critical condition at St. Luke’s Medical Center in Quezon City before he succumbed to head injuries, the dzMM radio report said.

Tolentino said the MMDA paid for all the hospital expenses of Acosta.

Libunao was arrested on charges of reckless imprudence resulting in serious physical injuries and driving with an expired license. Libunao denied the allegations against him, demanding a closed circuit television (CCTV) footage of the incident.

Acosta, who has three daughters, was the family’s sole breadwinner. His youngest child is just 6 months old.