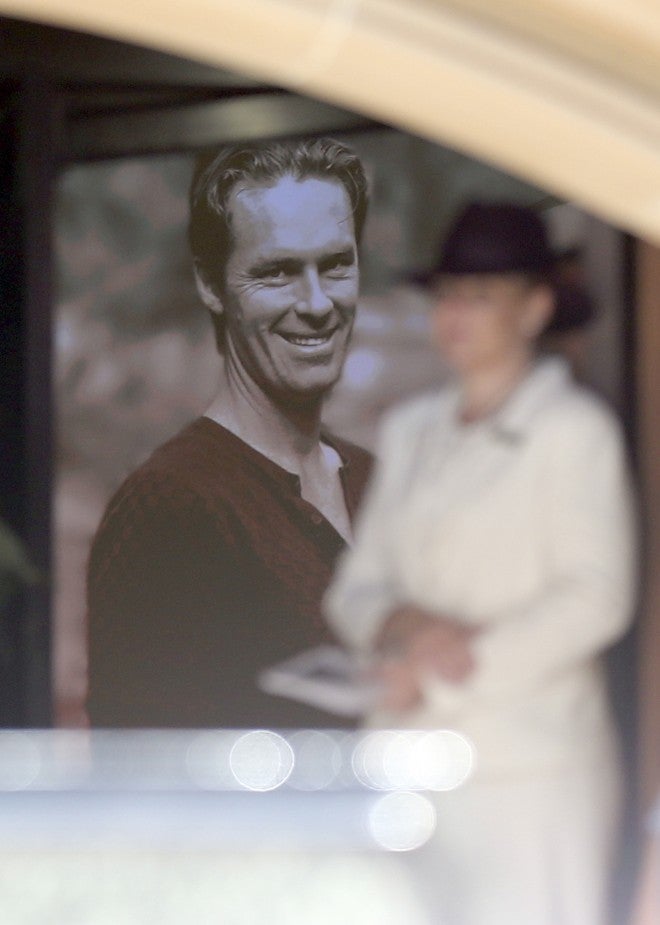 An image of Tori Johnson is projected onto the wall of St Stephens church during a funeral service in Sydney, Australia, Tuesday, Dec. 23, 2014. Johnson was one of three people including the gunman who were killed during a siege in the Lindt cafe coffee shop in Sydney on Tuesday morning Dec. 16, 2014. AP

SYDNEY — Two victims of a deadly siege in Sydney were remembered Tuesday at private memorial services, one week after a gunman took them hostage inside a downtown cafe.

The memorial for Tori Johnson was held at a church just around the corner from the Lindt Chocolat Cafe, where he and 17 others were taken hostage on Dec. 15 by a shotgun-wielding Man Haron Monis, a 50-year-old Iranian-born, self-styled cleric with a long criminal history.

The standoff ended 16 hours later when police stormed the cafe in a barrage of gunfire to free the captives. Johnson, the cafe’s 34-year-old manager, and 38-year-old lawyer Katrina Dawson were killed, along with Monis.

Johnson has since been lauded for his heroism, after unconfirmed reports emerged that he tried to wrestle the shotgun away from Monis, sacrificing his life and allowing several of his fellow hostages to escape before police moved in.

Johnson’s partner of 14 years, Thomas Zinn, and father, Ken Johnson, helped to carry the white coffin into St. Stephen’s Uniting Church. Tibetan monks chanted prayers at the end of the service and accompanied Johnson’s coffin to a waiting hearse.

Later, Prime Minister Tony Abbott joined hundreds of mourners at the University of Sydney for a memorial service honoring Dawson, a highly respected lawyer and mother of three young children.

Dawson’s friend and fellow hostage Julie Taylor, who is pregnant, said Dawson made her want to be a mother.

“Katrina’s greatest love was the love for her family,” Taylor said. “If there is one thing above all that we can learn from Katrina’s example, it’s how to love, to show love, to use love and by loving to make other people and places better.”

Johnson’s family and friends, along with several hostages who survived the siege, laid flowers at a makeshift memorial set up in Martin Place, a plaza in the heart of the city where the cafe is located. One woman kissed her fingers and pressed them against a flower-framed portrait of Johnson and Dawson that lay among the blooms.

Volunteers, meanwhile, removed thousands of bouquets of flowers that mourners have left at a separate site near the cafe over the past week, ahead of predicted rainy weather. The flowers will be turned into mulch that officials hope to use at a permanent memorial, while cards and letters left to honor Johnson and Dawson will be preserved in memory books for their families.

The permanent memorial will be set up after officials consult with the families, New South Wales Premier Mike Baird said.