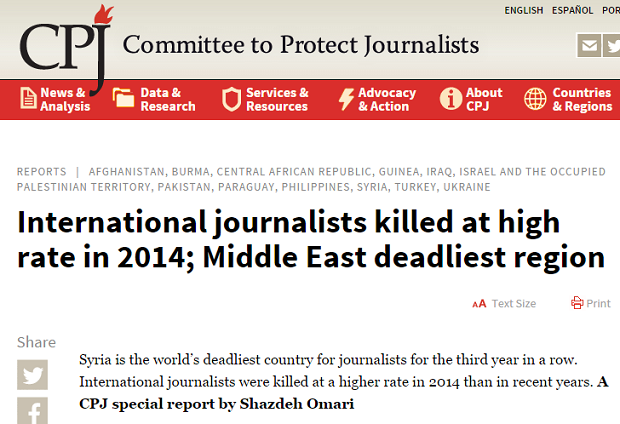 NEW YORK, United States – The gruesome murders of foreign journalists by the Islamic State group contributed to 2014 being a particularly deadly year for international correspondents, an annual review by the Committee to Protect Journalists reported Tuesday.

The CPJ study found that an “unusually high proportion” of the 60 journalists who died reporting from the world’s trouble-spots in 2014 were international journalists.

Among the grim toll were American journalists James Foley and Steven Sotloff, whose horrific beheadings by IS jihadists were published by the group in online videos in August and September.

German photographer Anja Niedringhaus also died after being shot by a police officer while working in Afghanistan covering elections for The Associated Press.

Six international journalists were among five reporters and two media workers killed in Ukraine this year, the first journalism-related killings CPJ has confirmed in the country since 2001.

In total, around a quarter of journalist fatalities in 2014 involved international correspondents — roughly double the usual mortality rate, the CPJ reported.

However, despite the high casualty rate of Western journalists, the study found that the “overwhelming majority” of reporters at risk for their work around the world continue to be local.

The CPJ cited the case of Syria, the deadliest country for journalists in 2014 for a third straight year with 17 deaths, as an example of the risks faced by local reporters.

Of the approximately 20 journalists estimated to be held hostage by the IS group, most are local, the CPJ said.

In total, some 79 reporters have been killed in Syria since the country’s bloody civil war erupted in 2011.

Syria has now passed the Philippines as the second deadliest place for reporters since the CPJ began keeping its tally of journalist killings in 1992. Iraq is the deadliest.

The CPJ said around half of the journalists killed in 2014 died in the Middle East, with 39 percent of them losing their lives in combat or crossfire.

The latest annual death toll means the past three years are the most deadly period ever recorded by the CPJ.