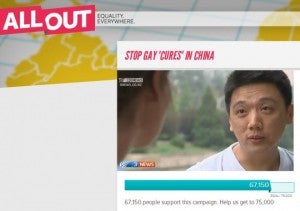 BEIJING–A court in Beijing ordered a private psychological counseling center to apologize and pay compensation to a 30-year-old homosexual man for providing him with treatment it characterized as a cure for his sexual preference. It was the first known lawsuit of its kind in China and has attracted widespread attention in recent months.

A court in Beijing ordered a private psychological counseling centre to apologise and pay compensation to a 30-year-old homosexual man for providing him with treatment it characterised as a cure for his sexual preference.

It was the first known lawsuit of its kind in China and has attracted widespread attention in recent months.

“I am very glad about the outcome,” Xiao Zhen, the plaintiff, said. “The court said the counseling center was involved in swindling by offering treatment because homosexuality is not considered a mental disease in China.”

According to the verdict, which was provided by Li Duilong, Xiao’s lawyer, the Haidian District People’s Court in Beijing ordered the psychological counseling center, Xinyu Piaoxiang, to issue an apology within 10 days on its website for a promotion”providing professional treatment to homosexuals”–and for the so-called treatment it provided to Xiao.

Xiao went in for treatment in February after he found the counseling center, based in Chongqing, through the promotions category of the Baidu, a search engine.

According to Xiao, the one-hour therapy session included hypnosis and electric shock treatment. The counselor first hypnotized him by asking him to imagine a gay sex scenario, and then administered an electric shock to his genitals when he reached orgasm.

In August, Xiao filed a lawsuit demanding an apology and compensation from the center and from Baidu.

China removed homosexuality from its list of mental disorders in April 2001.

The court rejected Xiao’s demand for an apology and compensation from Baidu on Friday, but urged the company to more strictly censor such promotions.

Li, Xiao’s lawyer, said the ruling made it clear that homosexuality is not a disease and requires no treatment, which will increase the public’s understanding of same-sex attraction and reduce discrimination.

“The ruling also set an example, so that those who have similar experiences can stand up and fight for their rights,” he said.

Zhang Beichuan, a professor of sexology at Qingdao University, said the ruling reflects the progress of Chinese society.

“These so-called psychological counseling centers have made use of the fear of homosexuals, who suffer discrimination, to get money illegally,” he said.

He said laws protecting homosexuals are lacking, and more sex education is needed so that people have proper attitudes toward homosexual groups.

It is estimated that the homosexual population in China stands at 40 million, including 30 million men. Discrimination remains widespread, according to experts.

WHO asked to denounce ‘gay cures’, declare homosexuality isn’t a disease in China