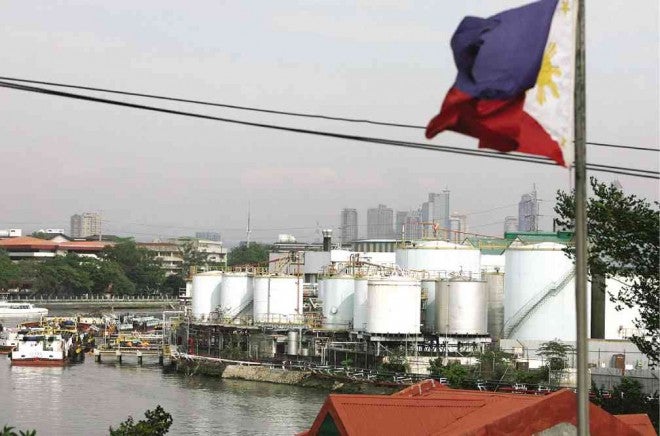 WHAT LIES BENEATH Operational since 1914 and set for removal next year, the Pandacan oil depot may require a long massive cleanup to be declared environmentally safe for new developments. FILE PHOTO

Manila city government officials have vowed to get the facilities of the “Big Three” oil companies out of the Pandacan depot by next year, but experts say it may take up to a decade before the 33-hectare property can be considered environmentally safe for commercial or residential developments.

Teresita Atienza, dean of the Polytechnic University of the Philippines (PUP)-College of Science, said “decontaminating” the land to be vacated by Petron Corp., Chevron Philippines and Pilipinas Shell Petroleum Corp. would involve a long, technically arduous process.

“It will take a long time to remove any oil spillage in the land and for it to be revived again. We are recommending bioremediation or the use of natural organisms to decontaminate the land and the river (next to it). Perhaps in 10 years we could see the effects,” Atienza said in a press conference earlier this week.

The PUP official explained that the depot, in operation since 1914, could be leaking petroleum and other toxic chemicals which must be extracted from the soil before building new structures in the area.

Atienza, who teaches natural science subjects, said PUP had actively campaigned for the removal of the depot, as strong fumes from the facility often reached the PUP campus on the other side of the Pasig River.

The fumes, she recalled, caused panic among students and even led to an evacuation and the cancellation of classes several times in 2001 and 2002.

“The Manila health department has long confirmed that fumes from the depot can be smelled by people across the river [and that] petroleum may have already leached into the soil. We must definitely do a cleanup here before we can build something,” said Donna Gasgonia, the local government coordinator for the oil depot relocation efforts.

“We don’t want another Rockwell Power Plant to happen here,” Gasgonia said, referring to the problem then faced by Rockwell Land Corp. in 1999, when the developer had to remove tons of contaminated soil and liquid at the Makati City property before it could be transformed into an upscale commercial and residential area.

The cleanup effort itself could already generate jobs for Pandacan residents, Gasgonia said. At present, PUP students are also conducting a survey of the residents’ job skills to assess their employability once the oil facilities give way to new economic activities, Atienza added.

City Hall has given Petron, Chevron and Shell until July 2015 to move out of Pandacan following a Nov. 24 Supreme Court decision ordering the oil companies submit a comprehensive relocation plan to be implemented within six months.

Voting 10-2, the high court upheld the legality of Manila Ordinance No. 8027 which was passed during the term of then Mayor Lito Atienza ordering the oil companies to relocate from Pandacan.

Citing the dangers posed by the depot to surrounding residential areas, the SC ruling thus repealed Ordinance No. 8187 passed under Atienza’s successor Alfredo Lim, which basically set aside the earlier ordinance and allowed the depot to stay.

Chevron said in earlier statements that it had not been using the facility since May, while Petron said it would be scaling down its operations in the depot, with some of its oil tanks already empty.