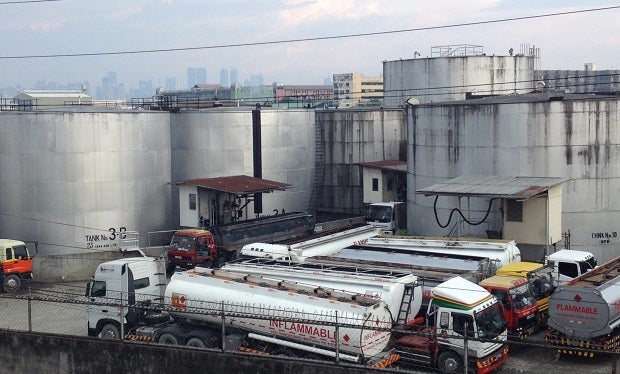 MANILA, Philippines–The “Big Three” oil companies that occupy the sprawling oil depot in Pandacan, Manila, will have to move out earlier than expected, in compliance with a Supreme Court ruling, after Manila Mayor Joseph Estrada gave them a shorter period within which to relocate to other areas.

“Pursuant to the latest Supreme Court Decision, the three oil companies should submit by January 15, 2015, their comprehensive relocation plans. And by July 15, the Pandacan Oil depot should be gone,” Estrada said in a press conference where he was joined by civic groups and residents supporting the relocation of the oil depot.

The mayor was referring to the decision of the Supreme Court in November, upholding the legality of Manila Ordinance No. 8027, which ordered the oil companies to relocate away from Pandacan, while repealing Ordinance 8187, which essentially repealed the earlier ordinance and allowed the depot to stay.

The court also ordered the Big Three oil companies—Petron Corp., Chevron Philippines and Pilipinas Shell Petroleum Corp.—to submit a comprehensive relocation plan to the Manila Regional Trial Court by January, and implement it in the next six months.

Estrada said that while he previously signed an order setting the eviction in January 2016 for the oil companies, he said the Supreme Court has ruled on the issue and that the lives and safety of thousands of residents nearby were more important.

“These are huge companies, and they pay good tax to our city. We will lose about P180 million in taxes we collect from them every year, but the lives of the many people living nearby are more important than that,” he said.

Estrada added that the city would not hesitate to use drastic measures to enforce the Supreme Court order, should the oil companies refuse to leave by the deadline set by the court.

“By July they must be out of here. If they stay behind by that time, I will have their gates blocked. I don’t fear them,” he added.

Aside from the enforcement of the oil companies’ eviction, Estrada said the city government has been studying what to do with the 33-hectare land after the dismantling and the thorough cleanup of the depot.

“There are many private owners of that land there. So we intend to ask them what they want to do. Hopefully we can come up with a business-friendly solution to raise more funds for the city,” Estrada said.

Civic and resident groups lauded the city government’s initiative in booting out the oil depot, but promised to keep an eye on them during the implementation of the plan.

“We can already see the light at the end of this long and winding cave, and the hope that we can live with our minds in peace in a safe and healthy environment,” said Tony Santos, president of the group representing Pandacan residents, the Advocates for Environmental and Social Justice.

“In the face of progress, after the oil depot is dismantled and with good governance, there is hope that there will be more job opportunities, affordable housing, and green spaces for the public,” Santos said.

Meanwhile, Manila Auxiliary Bishop Broderick Pabillo, a staunch supporter of the relocation of the Pandacan oil depot, said the City of Manila “should be dead serious in implementing the recent decision of the Supreme Court.”