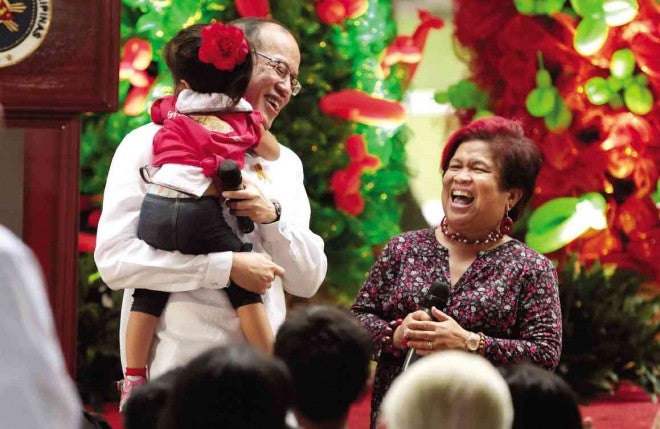 CHRISTMAS IS FOR CHILDREN In a playful mood, President Aquino carries a child during the Pasko ng Batang Pinoy gift-giving program at Malacañang on Friday. With him is Social Welfare Secretary Corazon Soliman. GRIG C. MONTEGRANDE

Less selfies and “Clash of Clans,” and more idealism.

This was the advice President Aquino gave his audience on Friday during the Jesus is Lord Worldwide Youth Summit, where he exchanged banter on his love life, Pope Francis, his Christmas wish and the perils of new technology.

“If we spend so much time taking selfies or strengthening the town in Clash of Clans, of course, it would really be game over for our dreams,” he said, referring to a popular video game.

Professing to be “young at heart and in looks,” Mr. Aquino, 54, however, couldn’t help but be fatherly when he sounded off about the Net.

“Of course, it is up to you how you want to use the technology available now. But do not forget to be astute. Not everything on the Internet is true. Not because something is viral or trending, we should spend time on it,” he told some 10,000 members of the Kristiyanong Kabataan para sa Bayan (KKB), on its 10th anniversary.

The KKB is the youth arm of the Jesus Is Lord (JIL) Church, which is led by one of Mr. Aquino’s friends, Sec. Joel Villanueva, the head of the Technical Education and Skills Development Authority (Tesda).

The President, 54, said he did not think twice about attending the youth summit.

Asked “the top three things” that he and Pope Francis might talk about during the papal visit next month, Mr. Aquino said: “Perhaps we might talk about the state of the Church that we belong to. We might also talk about what we are all doing toward what we call the ‘Kingdom of God’ here on earth, while we are here.”

Mr. Aquino, a Catholic, said he would like to thank the Pope for showing that the Catholic Church is very much alive.

The President was also asked why it was important to have young people serving in government.

Mr. Aquino answered: “The youth in general is a primary motive force for change in society. When you are older, when you have certain sets of responsibilities, then you tend to compromise some of the principles or the beliefs that you had when you were younger. The young, therefore, are the main means to rekindle these principles.”

In a way, the “older set” might have forgotten their idealism, the President added.

“The experience of the older set and the strength, resilience and energy of the youthful set combined … becomes a necessary component to effect changes right away,” Mr. Aquino said.

Asked what he wished for this Christmas, the President said he wants “to make sure that Filipino families get in touch and rebond with each other, reunite and keep that family intact … regardless of the distances involved.

A Filipino-Canadian who identified himself as Martin said he was among the many young people praying for President Aquino’s love life. To which the chief executive replied: “Maybe we should pray harder, but thank you!”

As the summit ended, Mr. Aquino agreed to pose for a selfie with Martin, with the rest of the young audience at Smart-Araneta Coliseum in the background.

‘Selfie’ generation, yes, but they do care