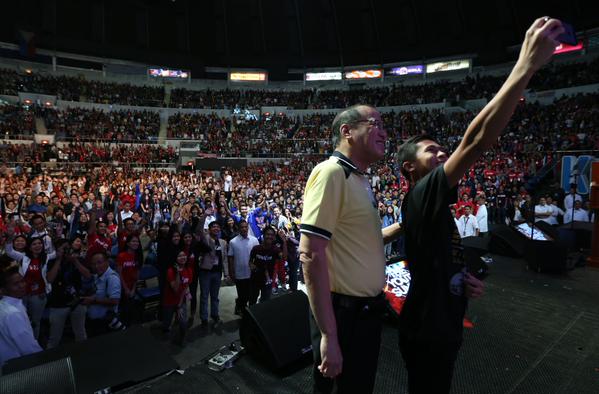 MANILA, Philippines – The combined efforts of the youth and the “older set” of citizens are key to effecting change in the country, President Benigno Aquino III said Friday.

But to achieve this, he said the youth should be wary of “distractions.”

“’Clash of Clans’ ang pinagkakaabalahan, paano ba mag-practice ng pagkuha ng selfie (You are preoccupied with ‘Clash of Clans’ or how to take a selfie). There is so much distraction,” Aquino told the audience during The Youth Summit 2014 held in Quezon City.

“Clash of Clans” is a popular mobile video game that has gained traction in the Philippines. A “selfie” is a self-portrait often taken using a camera phone.

Aquino pointed out that there were already “a lot of distractions” during his youth compared to that of his parents’ and now there are even more distractions.

In the middle of the open forum, however, the President obliged to take a selfie with a participant from Canada.

“I can’t take a selfie with all of you. But if you’re their representative, then that would not be a problem,” he said in jest.

The President said he was happy that groups like the Kristiyanong Kabataan para sa Bayan (KKB) of the Jesus is Lord (JIL) movement, the organizer of the event, were more concerned with meaningful things.

“Here you are going toward something with meaning, something of value and something that will redound to others’ benefits. Given that, why shouldn’t I support the things that you are undertaking?” Aquino said.

In the course of the open forum, he said he believes that the youth “is the primary motive force for change in society.”

“When you are older, when you have certain sets of responsibilities, then you tend to compromise some of the principles or the beliefs that you had when you were younger,” he explained.

He said that the youth are able to “rekindle” such principles and idealism that have “perhaps (been) forgotten by the older set.”

“The experience of the older set and the strength and the resiliency and the energy of the youthful set combined that becomes a necessary component to effect changes right away,” Aquino said. He said the combined force of the youth and their elders is “difficult to stop.”

Clash Of Clans comes to the Pinoy Gaming Festival!

‘Selfie’ is NCCA ‘Word of the Year’