‘Selfie’ generation, yes, but they do care 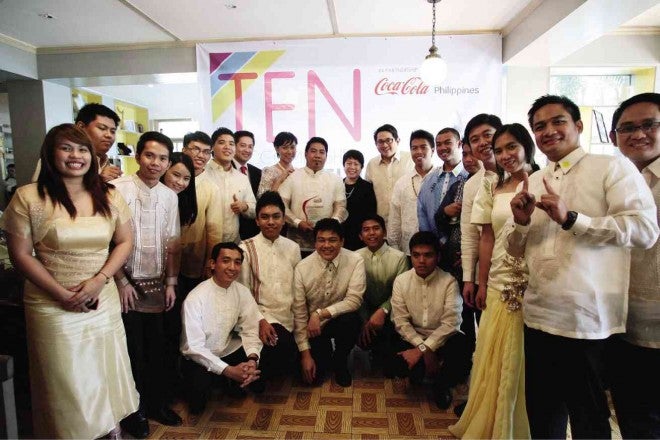 WINNERS and finalists of the 11th Tayo awards. Winners were chosen for their projects’ innovation, creativity and impact.

IT IS A generation wired for “selfies” and “tweets,” but the members of 10 youth organizations honored recently for their outstanding contributions to nation-building may be considered a cut above.

According to University of the Philippines communication research student Carla Cucueco of Tulong sa Kapwa Kapatid (2KK), the selfies were not always narcissistic exercises.

“Ours is a generation that [takes] selfies with the community to tell our stories to others… that writes project updates in 140 characters or less to encourage people to join in our efforts… that awaits notifications from new partners and members,” she said.

Cucueco’s group, consisting of high school and college students and young professionals, was one of the Ten Accomplished Youth Organizations (Tayo) winners chosen from 20 finalists short-listed from 286 nominations, the biggest  number received in the award’s 11 years of existence.

2KK won for its project of mentoring and providing scholarships and financial assistance to Payatas children.

Two university-based youth organizations are also among the Tayo awardees: the United Architects of the Philippines Student Auxiliary-Foundation University Chapter (UAPSA-FUC) and the University of San Carlos(USC)-Pathways.

The UAPSA-FUC’s project, Estudio Damgo or “architecture of dreams,” is the first student-led design-build studio in the country that aims to bring to rural communities construction concepts using native, sustainable and alternative materials. Jovi Biala, the group’s representative, said in a TV interview that he knew what it was like to be in a not-so-decent school structure. He went to a public school.

When Biala and his fellow “archi” students in UAPSA-FUC saw that the day-care center in Valencia town, Negros Oriental province, was a tent held up by two sticks, they knew they had to do something.

in 100 days. It is a 50-square-meter center built of treated bamboo, which made the local material fire-, water- and termite-resistant.

USC-Pathways, on the other hand, was recognized for Bridging the Gap (BTG), a monthlong program for high school students to prepare them for college.

Aside from financial concerns, USC-Pathways realized that “lack of academic preparation, self-esteem and educational resources” also made students, even scholars, drop out of college.

A taste of college

BTG is like role-playing with a cause. Trainees are put in real university setups to make them feel what college is like. “Beneficiaries [undergo] academic tutorials and review classes, as well as personality development seminars and workshops,” said Lui Kho, a USC-Pathway volunteer who once taught business writing.

“The program exposes them to the life and schedule of a college student. Students are given quizzes and major exams … They have access to university facilities,” Kho said, recounting his experience in a blog post on www.ourdreamph.org.

He said this was driving USC- Pathways to continue its work.

Sen. Paolo Benigno “Bam” Aquino IV, chair of the panel of judges and Tayo awards cofounder, said: “These (Tayo winners) are young people who saw a problem and did something about it.”

“Meaningful change doesn’t happen when people just stand by and accept the status quo. Long-term, sustainable change happens when people are willing to challenge the norm and take risks,” Aquino said in a statement.

Coca-cola Foundation president Maria Cecilia Alcantara said “no one is too young nor too old to share happiness.”

Established in 2002, Tayo is the country’s only award-giving body that recognizes and supports outstanding contributions of youth organizations in nation-building. Winners, who received their awards in Malacañang, each received a trophy and P50,000 cash from Coca-Cola Foundation Philippines.

John Paul Maunes and his group, GVSP, learning from a case study that one out of three deaf children is molested and, in some cases, murdered, decided they had to do something.

In every classroom they visited, children would say things like: “My father does that to me; he touches me all over; my neighbor takes me to a cold place and gives me P10 after.”

Maunes said a deaf girl’s “stomachache” turned out to be labor pains because she had been raped by her dad’s best friend.

GVSP also launched a police deaf desk to ensure deaf victims were properly attended to when they file complaints.

Michelle Frances Sayre of Aley-NM said people in Galas, one of the largest urban slums in Dipolog City, snickered when they explained that they did not need large spaces to grow organic vegetables for a living.

“They did not think planting without soil was possible,” Sayre said.

From four believers, Aley-NM has grown the number of its beneficiaries in Dipolog, Dapitan City and Leyte province to around 600.

Both income and nutrition improved as beneficiaries ate their produce and sold the rest, said 20-year-old Sayre. Having learned different vegetable recipes, some members of the communities have set up minifood stalls.

The winning group of 17-year-old Reven Bryan de la Peña, TCYLC, noted that many young Filipinos did not know how to save money. TCYLC embarked on a financial literacy project, going around schools in Tagum City to teach students the basics of saving and encourage them to join the cooperative.

De la Peña said they wanted to bring the bank to schools. To allow students to experience banking, they were given their own passbooks and were taught how to manage their finances.

“Our co-op has members as young as 7,” he said. “I did not think 7-year-olds would understand, but they do.”

A boy who sold vegetables religiously put his earnings into his co-op account so he could finish his studies.

TCYLC started with 48 members, with savings amounting to P8,000 four years ago. Today it has 1,487 members and P1.8 million in savings.

Finalist group Rescue Assistance Peacekeeping Intelligence Detail (Rapid) in Cebu City, composed of volunteers from all walks of life, often worked with police in rescue and emergency work and peacekeeping.

Rafael Enriquez said they noticed how street children addicted to Rugby contact cement were in and out of police stations every day for petty crimes. The kids could not be jailed under the juvenile law.

When asked about their addiction, the usual response was “they were hungry and had nothing to eat,” Enriquez said.

The group decided to feed the kids using their own money, first once a week and now three times a day. It also held different activities, sent the kids to school and made them live in the police station. The chief allowed the use of police cars to bring the kids to and from school.

Through voluntary donations Rapid was able to clothe, feed and shelter 49 Rugby boys.

If these amazing efforts have not convinced you that this generation does more than whine in social networking sites, visit www.tayoawards.net.