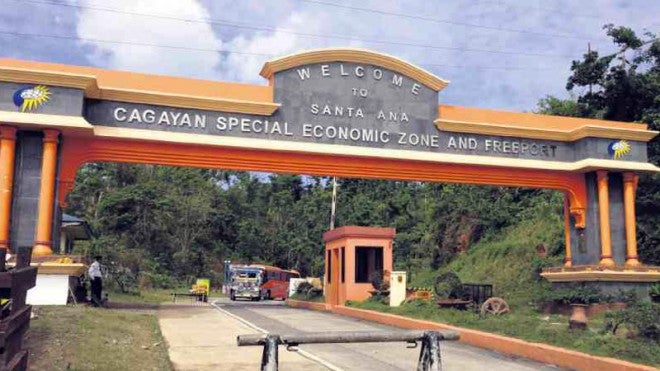 NORTHERN EXPOSURE. The gate to the Cagayan Special Economic Zone welcomes investors to the free port in the far northern Philippines where Sen. Miriam Defensor-Santiago wants a P5.101-billion breakwater project investigated to see if Sen. Juan Ponce Enrile had a hand in the award of the contract to an allegedly favored company. VILLAMOR VISAYA JR./INQUIRER NORTHERN LUZON

MANILA,M Philippines—Sen. Juan Ponce Enrile’s senior partners in his law firm, Pecabar, have invoked lawyer-client confidentiality to keep under wraps the true identity of the private partner of the Cagayan Economic Zone Authority (Ceza) in the government’s project to develop Port Irene.

In a letter to the Inquirer, Eleazar B. Reyes and Jesus Manalastas of the Ponce Enrile Reyes & Manalastas law firm, or Pecabar, clarified that they were merely representatives in August Star Holdings Corp., the company that took control of Ceza’s port operator Asia Pacific International Terminals Inc. (Apit) two years ago, which they claimed was owned by “a group of Ceza locators/investors” that they did not identify.

“We, as lawyers, are strictly bound by the Rules of Court and Code of Professional Responsibility from disclosing or being examined, without the consent of our client, ‘as to any communications’ made by the client to his lawyer, or ‘his advice given thereon in the course of, with a view to his professional employment’ (the attorney-client privileged communication), not to mention the penalties imposed by our criminal law on violations of such ‘betrayal of trust’ or ‘revelation of secrets,’” they said.

Data culled by the Inquirer showed that Manalastas and Reyes were incorporating stockholders of August Star along with three former Pecabar  lawyers—Loreto C. Ata, Pablo A. de Borja and Rainier L. Madrid—all of whom paid P12.5 million each for the obscure financial holding company’s P65-million paid-up capital as of August 2012.

By virtue of their holdings in August Star, the five lawyers were elected as directors of Apit with another Pecabar associate, Kay Angela Peñaflorida, acting as the sixth director and Apit’s corporate secretary.

Apit is virtually under full control of the Pecabar group, as Reyes and Manalastas are also the company’s chair/president and treasurer, respectively.

Reyes and Manalastas said that when Apit and Ceza signed its build-operate-and-transfer (BOT) contract in May 23, 2000 (which was approved by then President Joseph Estrada), it was originally owned by the Rafael J. Dizon Jr. Group, which they described as a “reputable group well experienced in the operation and development of seaports in the country.”

They said a new group of shareholders—a consortium led by Wilfredo Serafica—acquired the Dizon group’s shareholdings in Apit in 2004.

“It was only in mid-2012, after the BOT contract had been in effect for 12 years that a group of Ceza locators/investors pooled their resources to acquire the Serafica group’s shareholdings, which is about 81.25 percent of Apit’s then outstanding capital stock. We were engaged by this group to handle the ‘pooling’ of the funds and the acquisition of the shares, which is the reason why we organized a new company, August Star,” Reyes and Manalastas said.

They denied that the ownership structure of Apit was “intentionally designed for an iniquitous purpose, i.e., to conceal an unlawful ownership of the company.”

“This structure was not patterned after the Marcos-era [legal tactics] but is the prevailing form or vehicle of stockholders’ [aggroupment] practiced in present-day business, especially for investments in long-term development and infrastructure projects,” they said. “The insinuation that we are concealing something illegal relative to the ownership of Apit is malicious.”

A high-level government lawyer, who declined to be named due to the sensitivity of the subject, claimed that Apit’s corporate structure was patterned after Marcos-era legal tactics to hide a company’s true ownership.

The same lawyer noted that Pecabar was formed in 1983 by Enrile and the late Sen. Rene Cayetano after a falling out with their partners at Accra (Angara Cruz Concepcion Regala and Abello), the country’s most powerful law firm during the martial law years, which specialized in weaving corporate veils to conceal the real owners of companies, such as the businesses established with financing from the coconut levy fund.

Reyes and Manalastas also took note of Sen. Miriam Defensor-Santiago’s insinuation that their founding partner, Enrile, had “financial interests” in the P5.101-billion, government-funded breakwater project in Port Irene, suggesting that he had a hand in picking the contractor, Sta. Elena Construction and Development Corp. of businesswoman Alice Eduardo.

“Such implication is unduly strained and does not actually fit reality,” Reyes and Manalastas said, noting that Enrile has been “on leave” from Pecabar since 1987 when he was first elected to the Senate.

Enrile has denied having anything to do with Ceza or Apit or Eduardo’s businesses.

Eduardo, whose company won all five contracts bid out for the 1,000-meter breakwater project, which was started in 2008 and expected to be completed this year, is reportedly a close friend of Gigi Reyes, who fled the country last year to evade plunder charges filed against her for allegedly serving as bagman in the diversion of Enrile’s pork barrel allocations to fake foundations controlled by detained businesswoman Janet Lim-Napoles.

In a two-page letter, Santiago asked Justice Secretary Leila de Lima last week to investigate Enrile’s alleged influence in the disbursement of P5.101 billion in public funds to pay for the breakwater project handled by Eduardo.

“Enrile was able to insert this humongous amount in the budget for the Cagayan Freeport for the last five years. It appears that Enrile used their names to surreptitiously morph the Freeport into the main vehicle for smuggling and other illicit operations,” Santiago said.

Reyes and Manalastas said that under the BOT plan, Ceza was obliged to fund the construction of a breakwater as a “condition precedent to the performance of Apit’s obligations under the arrangement, as it (breakwater) is key to the safety and efficiency of ship loading and unloading at the port.”

But while Ceza has already lived up to its part of the deal, it remains unclear how much Apit has spent or will spend in Port Irene.

Reyes and Manalastas explained that the BOT contract “did not specify the amount to be expended by Apit.”

“It requires Apit to put up and operate a detailed list of port infrastructure, capital equipment, and operational and maintenance facilities, utilities and services designed to achieve the primary objective of using Port Irene as the catalyst for the privatization of the Cagayan Valley region and eventually as a major transshipment  and foreign trade hub during the 25-year concessional period,” they said.

“On top of the huge capital and operating outlay to be expended by Apit, it commits to pay an annual guaranteed payment to Ceza from its revenues,” they said.