MANILA, Philippines – The House of Representatives has passed a bill seeking to strengthen the Sandiganbayan’s capacity to resolve its pending corruption cases.

House Bill 5283 is entitled “An act strengthening further the functional and structural organization of the Sandiganbayan.”

The bill seeks, among others, to increase the number of Sandiganbayan divisions to seven from five, amending for this purpose Presidential Decree No. 1606, as amended.

Two justices, under the bill, will constitute a quorum for all divisions, and that if a quorum could not be met, the Presiding Justice may assign a member of another division as a special member of that division, to be determined on a strict rotation on the basis of the reverse order of precedence, and with all the rights and prerogatives of a regular member. 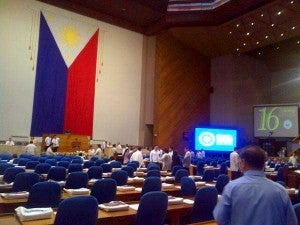 The measure also seeks to declog the dockets of the court and transfer smaller cases from the Sandiganbayan to the Regional Trial Courts.

The bill wants the Sandiganbayan to have jurisdiction over cases involving the following: Violations of Republic Act No. 3019, as amended, otherwise known as the Anti-Graft and Corruption Practices Act, and Republic Act No. 1379, and Chapter II, Section 2, Title VII of the Revised Penal Code.

Iloilo Rep Niel Tupas Jr., chairman of the justice committee and an author of the bill, has said that the Sandiganbayan’s capacity to complete the process of litigation – from filing of information to promulgation taking about seven years – undermines the legal maxim “Justice delayed is justice denied.”

Another author Cavite Rep. Francis Gerald Abaya also said each division is only capable of holding two hearings for each case every two months.

The passage of the bill comes in light of the Sandiganbayan’s proceedings over the plunder and graft cases of one of the most controversial corruption scandal in the country – the pork barrel scam that implicated three senators and accused mastermind Janet Lim-Napoles.