The Philippines endures about 20 storms annually, many of them deadly, but authorities warned that Pedring was one of the largest to hit the country this year with its rain and wind path twice as big as average storms. 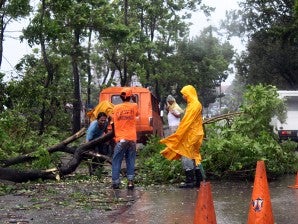 BRAVING ‘PEDRING’. Maintenance crew from the Department of Public Works and Highways brave strong winds to clear Agham road in Quezon City of fallen trees caused by Typhoon “Pedring”. Maximum winds of 140 kilometers per hour with gustiness of up to 170 kilometers per hour have been recorded by the Philippine Atmospheric, Geophysical and Astronomical Services Administration (Pagasa). MATIKAS SANTOS/INQUIRER.net

“This typhoon is very wide in diameter, about 650 kilometers [400 miles], and covers most of [the main island of] Luzon,” Science Undersecretary Graciano Yumul, who supervises the country’s weather bureau, told reporters.

Pedring hit the northeastern side of Luzon before dawn, bringing maximum sustained winds of up to 140 kilometers (87 miles) an hour and gusts clocking in at 170 kilometers an hour.

The National Disaster Risk Reduction and Management Council said a baby died when he fell into a swollen river in the eastern province of Catanduanes.

Four other people were missing and there were fears the death toll would rise throughout the day.

The agricultural provinces of Isabela and Aurora were the most heavily affected initially, although storm alerts were also hoisted in over 40 other areas, including Metro Manila, the state weather bureau said.

The presidential palace announced the suspension of all classes and work for government agencies in Manila and other affected areas.

Some roads around Manila, a sprawling megacity of more than 12 million people, were impassable on Tuesday morning due to flooding and falling debris, including branches that had been ripped off trees.

The Philippine Stock Exchange also suspended trading, while operations of Manila’s main overhead railway system ground to a halt due to a power outage, stranding passengers in the morning rush hour, officials said.