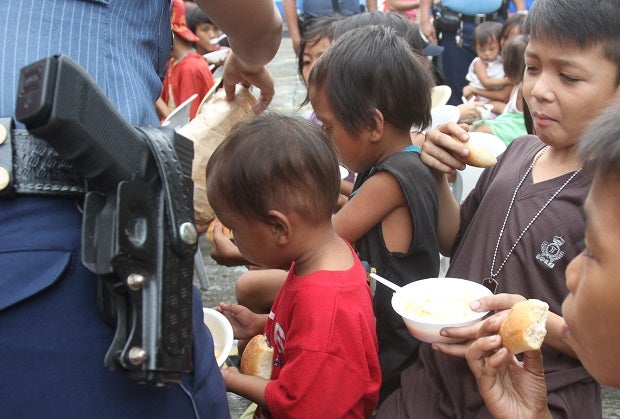 Children line up at a feeding program of the government. A bill prohibiting violent forms of discipline for children has passed the House of Representatives. INQUIRER

MANILA, Philippines – The House of Representative has passed a bill prohibiting violent forms of discipline for children.

The lower chamber approved on third and final reading House Bill 4907, or the Positive Discipline Act, which seeks to protect children against corporal punishment.

Under the bill, humiliating and degrading children like kicking, slapping, hair-pulling, dragging or tying up a child are prohibited.
The measure also forbids forcing children to do physically painful or damaging acts, like kneeling on stones.

Verbal abuse, swearing or cursing, and making a child look or feel foolish in front of one’s peers or in public are also prohibited in the proposed legislation.

The refusal to provide for a child’s physical needs is also considered a crime by the bill.
“Effective and positive discipline establishes the foundation for children to learn self-discipline, protects them from dangers of violent discipline and help instill in them the value of self-control and responsibility,” said Akbayan Rep. Barry Gutierrez, one of the bill’s authors.

“We strongly discourage parents and guardians to discipline with sticks, which, in the long run, may prove counterproductive, for both parents and children,” he added.

Violators may be penalized with up to six months imprisonment or longer as provided for under the Revised Penal Code or under the Anti-Violence Against Women and Their Children Act of 2004.

Offenders will also be compelled to undergo seminars and counseling on children’s rights, positive and non-violent discipline of children, anger management, and referrals to other rehabilitative services.