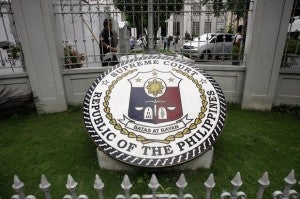 MANILA, Philippines–The Supreme Court has placed under preventive suspension the Sandiganbayan security guard accused of soliciting money from the lawyer of Janet Lim-Napoles.

In an order, the high court said Ronald Allan Gole Cruz is placed under preventive suspension while the court decides on the complaint.

“Considering the gravity of the imputed wrongdoing, which can be classified as grave misconduct and/or conduct prejudicial to public interest, and considering further the long holidays ahead, it is necessary to place Cruz under preventive suspension,” the resolution read.

In the letter, security guards Darwin Trinidad and Rodelio Lalongisip said Cruz first asked a cameraman to deliver a solicitation letter to David in the men’s comfort room.

The security personnel denied Cruz’s claim that there was a scheduled Christmas party for the security staff.

“We are praying that this matter be given due course for we cannot afford to let one rotten tomato destroy the image of the entire security force,” Trinidad and Lalongisip said.