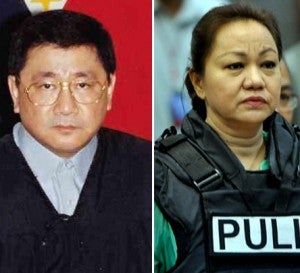 It was not about earthly matters, though, but about spiritual needs, or so she claimed.

Napoles, who had been locked up for more than a year over various criminal charges related to the fund scam, also denied personally knowing Ong, the first justice of the antigraft court to be dismissed for gross misconduct, dishonesty and impropriety.

“My case was dismissed in 2010. It was already 2012 when he sought my help to contact Monsignor (Josefino) Ramirez about the (Black) Nazarene,” Napoles told reporters after attending her bail hearing at the Sandiganbayan Third Division.

She was referring to the malversation cases filed against her and several others in 1998 in connection with the anomalous purchase of Kevlar helmets for the Philippine Marines.

Ong, then the chair of the antigraft court’s Fourth Division which tried the case, absolved Napoles of any complicity in the case.

Ramirez is the former parish priest of Minor Basilica of the Black Nazarene, more popularly known as the Quiapo church, the home of the religious image which many Filipino Catholics regard as miraculous.

The controversial prelate was also the “chaplain, personal confessor, advisor and priest” of Napoles, according to her lawyer Stephen David.

Asked if she personally knew Ong, Napoles said: “I did not know him.”

David said Ong approached a “driver or friend” of his client to help him find a way to have access to the Black Nazarene image.

He said the person then referred Ong to Napoles since “she was very close to Monsignor Ramirez.”

Whistle-blowers in the pork barrel scam earlier disclosed that because of Napoles’ closeness to Ramirez, she was able to bring the Black Nazarene, which attracts millions of devotees during its annual procession every Jan. 9, to her home.

“I think (Ong) was desperate at that time because of his prostate disease. But it has nothing to do with the Kevlar case,” David said.

In fact, he said Napoles was annoyed by how Ong treated her and her lawyers during the trial of the case.

“He was very snappish and strict during the court proceedings,” David said.

“When (Napoles) was informed that Ong was seeking her help, she told that person that Ong should go to her directly because she was not happy the way he treated her during the trial,” he said.

He also played down the accusations of primary whistle-blower Benhur Lur that the dismissed justice received checks from Napoles.

“I can honestly say that that is impossible,” David said.