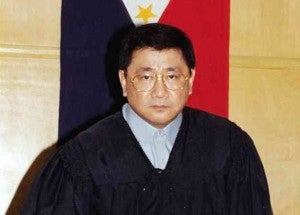 MANILA, Philippines–The fate that befell dismissed Sandiganbayan Associate Justice Gregory Ong has a “chilling effect” on justices of the antigraft court and judges of the lower courts in the country, two Sandiganbayan magistrates told the Inquirer on Wednesday.

Ong’s former colleagues also expressed concern over the condition of the ousted justice after they failed to contact him since the Supreme Court handed down a decision finding him guilty of “fraternizing” with suspected pork barrel scam brains Janet Lim-Napoles.

The two justices agreed to speak with the Inquirer provided that they not be named in deference to the magistrates of the high court.

“We are all worried about him. He apparently detached himself from the outside world. Nobody knows how to reach him,” one of the justices said.

“What happened to Justice Ong was a classic case of guilt by association. Just because he was close to one of Napoles’ friends, he was suspected of also benefiting from Napoles’ illegal activities,” the justice added.

Ong reportedly last contacted a fellow member of the Sandiganbayan shortly after the Supreme Court voted to dismiss him from the 15-member antigraft court.

“From what I know, Justice Ong had lunch with his siblings on Tuesday. After the Supreme Court’s decision spread in the media, he apparently turned off his mobile phone,” he said.

Another justice lamented that the high court’s ruling would have adverse effects on the confidence of judges of first level and trial courts in the “dispensation of real justice.”

The second justice lamented that the evidence and testimonies of whistle-blowers Benhur Luy and Marina Sula against Ong were “merely hearsay.”

“The chilling effect is not only on the Sandiganbayan justices, but on all the judges of the lower courts. We are shocked by this,” he said.

“This only showed that judges like me may be dismissed from the judiciary based on hearsay evidence and testimonies.”

With Ong’s ouster, he said some unscrupulous individuals may accuse members of the judiciary with unfounded allegations to harass them.

“Even the Supreme Court ruled that the evidence against Justice Ong was not enough to support bribery and corruption charges,” he said.