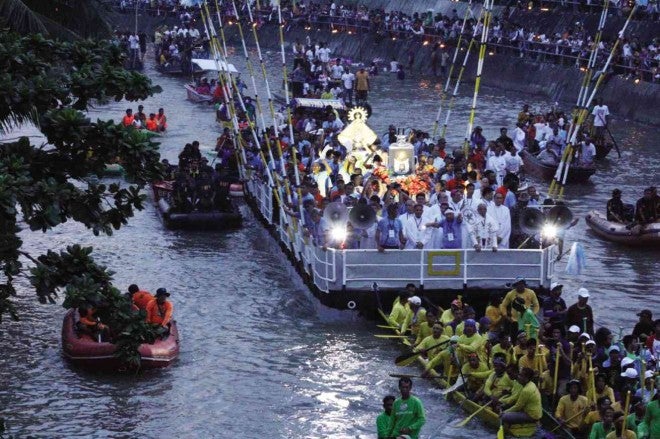 FLUVIAL PROCESSION The Our Lady of Peñafrancia’s pagoda boat heads back to the Bicol patroness’ permanent residence at the Basilica Minore during a fluvial procession. Saturday’s event is a culminating act to a weeklong religious feast in Naga City. JUAN ESCANDOR JR.

NAGA CITY—Farmer Wilfredo Cedo felt honored and happy to have been chosen by his parish priest in Libmanan town, Camarines Sur province, to board the pagoda boat with the Our Lady of Peñafrancia or Ina, the patroness of Bicol, which is revered by millions of people around the world.

“As a farmer, I ask for nothing more than good health and good harvest for me, my family and fellow farmers. She had blessed us already enough during the past years,” said the 59-year-old Cedo, who is also a construction worker.

He believes that God saw him fit to be a passenger on Ina’s vessel during the fluvial procession along the Naga River on Saturday, which ended the nine-day Peñafrancia feast, in Camarines Sur province.

Another farmer, Primo Velasco, 62, says he was sent by his parish to represent the tillers of Polangui town in neighboring Albay province, despite his aging body.

“Now that I am honored to be on her pagoda (boat) myself, I think this is a sure sign that I was right in choosing to live a God-centered life,” Velasco says.

Cedo and Velasco have been long time devotees of Ina. They were among the farmers and fishermen selected from the seven dioceses of Bicol and 35 parishes of the Archdiocese of Nueva Caceres to ride the pagoda boat at 4 p.m. after Mass at the Naga Metropolitan Cathedral.

New Archbishop Rolando Tria Tirona, who was installed to lead the 1.18 million Catholics in Camarines Sur in 2012, ended the tradition of selecting 200 “elite male passengers,” including priests, of the pagoda boat so that ordinary folk can experience what it is like to be among the limited few given the privilege during the fluvial procession.

No one can tell the exact year when the practice that was exclusive to politicians, businessmen, technocrats, celebrities and civic leaders began.

Citing Pope Francis, Tirona says the Catholic Church is now focused on being “inclusive” to the poor, the sick, the lowly and ordinary folk. He said the priests decided in a meeting to highlight the farmers and fisherfolk in this year’s Peñafrancia feast in the “spirit of inclusiveness.”

In 2010, Sen. Ramon “Bong” Revilla Jr. created quite a stir when he rode the vessel of Ina, waving to the crowd of devotees watching along the banks of the Naga River. His act was seen as an affront to the celebration as tradition dictates that only Ina must be the center of attention during the event and no one can steal the limelight from her.

A folk belief also pointed out that the selection of only male devotees as riders ensures that Ina would be the only female among the passengers, so attention would be focused on her.

The prelate started last year the selection of representatives from ordinary folk to ride in Ina’s pagoda boat based on feedback from the priests who disclosed that it was the same prominent passengers who were on board every year.

All the dioceses and development organizations in Camarines Sur and five other provinces in Bicol were informed about the change and invited them to send their representatives, Tirona says.

“Of course there was a backlash. There were reactions like that ‘it’s our panata (vow),’ but let’s give others a chance to ride with Ina,” he says. “We will, if they have their panata, they can still participate in the fluvial procession by riding in different boats to accompany Ina.”

The issue of who would ride always crops up every year since Tirona headed the archdiocese. “I came from a small diocese. I am new here. Let’s make a fresh start and let’s change things,” he had told the devotees.

This year, 150 to 200 other farmers and fishermen joined Cedo and Velasco as Ina made the journey along the Naga River, pausing at certain points along the banks where residents, who prayed the rosary while waiting, waved handkerchiefs.

The burst of joy in the hearts of the devotees was matched by the fervor of those on board a hundred fishing boats, painted yellow, blue and white, that accompanied Ina’s boat.

Residents shouted “Viva La Virgen” at various stops as the flotilla of boats winded down the three-kilometer stretch from the danlugan (wharf) at the western side of Naga to the eastern-side wharf fronting the patroness’ permanent home, the Basilica Minore.

The pagoda boat reached the Basilica at 6:20 p.m. where a Mass was said, ending the festivities honoring the 304-year-old Bicol icon.