Learning how to survive a plane crash 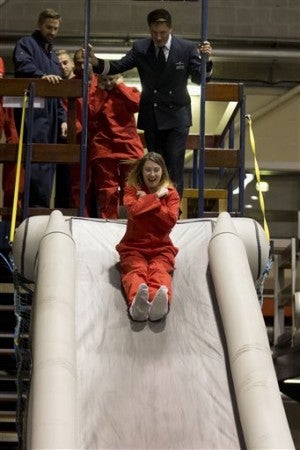 In this Sept. 10, 2014 photo, a participant slides down an escape slide during a British Airways flight safety course at the airline’s Cranebank training facility, near Heathrow airport in London. AP FILE PHOTO

LONDON — They raced down the slide, one by one, like children on a playground. At the bottom, smartphone photos were snapped and high fives exchanged.

The frequent fliers were all smiling and laughing — and quietly hoping to never use an evacuation slide again. Doing so would mean their plane had just crashed.

The slide demonstration was part of a half-day safety course that encourages passengers to be aware of their surroundings and familiarize themselves with what happens in an emergency. The two dozen participants learned the best way to brace for a crash, how to open aircraft doors and why to wait until exiting a plane to inflate life vests.

“In this day and age, everybody is so comfortable with flying, they get on planes and don’t consider safety,” says Andy Clubb, a safety instructor at British Airways’ flight training center.

Started as a training exercise for oil company employees who routinely flew to remote locations, the course is now open to frequent fliers willing to pay $265, although most participants are still sent by their companies. There are up to three classes a week.

The class begins inside a Boeing 737 cabin simulator. Airplane seats are selected. Seatbelts are buckled. The safety demonstration begins. Just like on a real flight, nobody pays attention — and these are passengers who know there is going to be a crash. The simulator rocks back and forth like taxiing, then tilts up for takeoff.

Soon theatrical smoke fills the cabin and the flight attendants shout “Brace. Brace. Brace.” Everybody’s head goes down until the evacuation order is given.

It’s a scramble to the nearest exit. Some passengers fare better than others. Seatbelts aren’t snapped off quickly enough. One woman struggles to open the emergency exit over the wing.

When the smoke clears, the group sits back down and learns that six to eight passengers can go through the door in the time it takes one passenger to go through the tiny over-wing exit. Seconds count. In the simulator, anyone who hesitates gets a stern lecture. In real life, they’re pushed out the door, down the slide by a flight attendant.

Clubb explains that the key to survival is getting into the proper brace position: Bend forward as far as possible, keep your head down. Place your feet flat on the floor and slide them back.

Your dominant hand goes on the back of your head. Protect that hand by placing the other hand over it. Do not interlock fingers. The goal is to ensure that the bones in the stronger hand aren’t broken so you can eventually unbuckle the seatbelt.

Will members of the class ever use the training? Each day, 8.3 million people around the globe step aboard some 93,500 flights. They almost always land safely. In the past decade, there have only been 138 crashes worldwide that had fatalities, according to aviation consultancy Ascend.

The majority of crashes occur during takeoffs and landings and there are often survivors.

“The likelihood is that you are never going to have to do it in a real life situation. But knowing now that you could do it, just gives you a bit more confidence,” says participant Sarah Barnett, who frequently flies in her job marketing vacation destinations. (Classes can be booked here: http://www.britishairways.com/en-us/baft/flight-safety-awareness/courses-for-individuals)

The course also aims to give the fliers confidence in the people at the front of the plane.

“The two guys at the front of your airplane are probably the most highly regulated and checked professionals you’ll find anywhere — certainly more than your doctor or your lawyer or your accountant,” says British Airways pilot Martin Hockfield.

Hockfield tells the class that pilots come in twice a year for testing. In a simulator, they practice takeoffs with engine failures or landing after a loss of hydraulic pressure. It’s like taking a driving test every six months — in a broken car.

British Airways hopes the more than 15,000 people who have taken the training since 2004 can act as leaders for others to follow in a crash. Some passengers freeze or melt down in an emergency. If they see someone quickly, calmly and confidently following a flight attendant’s instructions to evacuate, they might do the same.

The instructors share this takeaway: All passengers should think about an emergency during the safety demonstration. Use that time to look for the nearest exit, plus an alternative one. Check where the life vest is and practice unbuckling the seatbelt to build a bit of muscle memory.

There were other safety tidbits dispensed that day. Red lights always signal an exit because the color cuts through smoke the best. Always inflate life vests outside the plane; they can limit mobility in a tight space and if water fills the cabin, passengers with inflated vests can be pressed up against the ceiling, unable to swim down to the door.

All bits of knowledge that, if they’re lucky, passengers won’t ever need.

“Fingers crossed, this afternoon has been a complete, utter waste of time.” Clubb says. “You are at greater risk getting in your car and driving to the airport.”