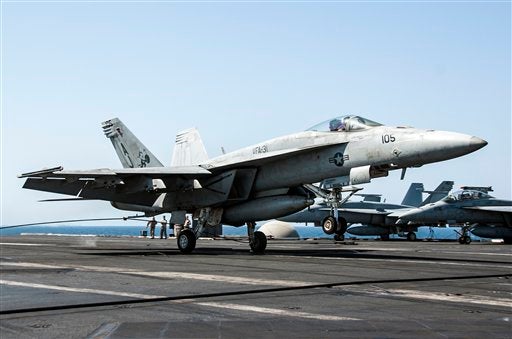 In this file image provided by the U.S. Navy on Tuesday, Sept. 23, 2014, a F/A-18E Super Hornet attached to the Tomcatters of Strike Fighter Squadron (VFA) 31 lands aboard the aircraft carrier USS George H.W. Bush after conducting strike missions against Islamic State group and other targets in Syria. AP

DUBAI, United Arab Emirates (AP) — The Arab nations that joined the United States in striking the Islamic State group in Syria were unusually open about it, throwing aside their usual secrecy and wariness about appearing too close to Washington. Saudi Arabia even released heroic-looking photos of its pilots who flew the warplanes.

Their boasting reflects the depth of Gulf nations’ concern over the threat of the extremist group sweeping over Iraq and Syria. It also shows their desire to flex some military muscle toward regional rival Iran, a key supporter of the Syrian and Iraqi governments.

But the Sunni monarchies run the risk of a backlash by hard-line Islamists angered by the attacks against the Sunni fighters, whom many see as battling a Shiite-led government in Baghdad. Militant websites sympathetic to the Islamic State group lit up on Wednesday with the photos of the Saudi pilots, alongside calls for them to be killed.

Even beyond the ranks of hard-liners, many around the region are suspicious of U.S. motives in yet again launching military action in an Arab nation. Many among the Syrian rebels grumble that the United States and Arab nations ignored their pleas for action against Syrian President Bashar Assad for years and are intervening now against the radicals only because it is in their interest.

Moreover, the U.S. expanded the strikes beyond the Islamic State, hitting al-Qaida’s branch in Syria, the Nusra Front, in a bid to take out a cell called the Khorasan Group that is believed to be plotting attacks against the United States. That has other Syrian rebel factions with Islamic ideologies — and there are many of them — worried they, too, could be hit by the Americans.

“For four years, we called on the West to help us topple the regime, but it’s clear the target is the Islamic factions,” said a Damascus-based opposition activist, Abu Akram al-Shami, speaking via Skype.

The countries whose air forces carried out strikes were all Sunni-led states run by hereditary monarchs with longstanding ties to the American military: Saudi Arabia, the United Arab Emirates, Jordan and Bahrain. Another Gulf monarchy, Qatar, played a supporting role, according to the Pentagon. President Barack Obama — who had been eager for Arab backing in the campaign — praised them for their willingness to stand “shoulder to shoulder” with the U.S.

Perhaps most vulnerable to a backlash is Jordan, which borders Syria and has a strong community of Islamists and ultraconservative Salafis who have sympathies with the Islamic State group. Jordan was the homeland of Abu Musab al-Zarqawi, the militant who founded al-Qaida’s branch in Iraq, which eventually evolved into the Islamic State group. He was killed eight years ago in a U.S. airstrike in Iraq.

Mohammed al-Shalabi, a prominent figure in the jihadi-Salafi movement in Jordan, told The Associated Press that while the Islamic State group has “made mistakes” — killing journalists, for example — it is still part of the Muslim nation and U.S. strikes against it will only build support for it.

“The U.S. is hated in the region because of its support for Israel. People will now feel sympathy with (the Islamic State group) against the U.S.,” he said.

“This war is not in Jordan’s interests,” the deputy head of the Muslim Brotherhood in Jordan, Zaki Bani Rsheid, told the Al-Ghad newspaper. He warned that the war would only boost the power of Iran across the region and that Jordan’s participation could bring “responses targeting its internal security and stability.”

In a move some saw as an attempt to soothe Salafi anger, a Jordanian court on Wednesday acquitted and freed a radical Muslim preacher known for his pro-al-Qaida sermons, Abu Qatada. Analysts said the preacher could help give legitimacy to the campaign against the Islamic State group — or at least help keep Salafis quiet over it.

The action in Syria makes for the largest grouping of Arab military forces against a common target since the broad-based coalition formed to evict Saddam Hussein’s Iraqi forces from Kuwait in 1991, according to analysts at the Austin, Texas-based geopolitical intelligence company Stratfor.

Their participation reflects the growing concern among Gulf countries — particularly Saudi Arabia and the Emirates — about the rise of Islamist groups in the wake of the Arab Spring, such as the Muslim Brotherhood movement and various al-Qaida affiliates.

“The Islamic State represents a direct threat to the national security of these countries,” said Hossam Mohamed, a political analyst at the Regional Center for Strategic Studies in Cairo.

Saudi Arabia and the Emirates, the two richest of the group, boast some of the region’s best-equipped militaries, including Western-made fighter jets and Apache attack helicopters.

The Emirates in particular has been playing a more active military role. It has deployed troops as part of the NATO-led mission in Afghanistan and, along with Qatar, contributed warplanes to the alliance’s aerial campaign over Libya in 2011 that helped lead to the ouster of Moammar Gadhafi. American officials have also said the Emirates carried out airstrikes against Islamist rebels in Libya last month, but the country has not confirmed that.

American and French sorties targeting the extremists have flown from air bases in Qatar and the Emirates, and from the aircraft carrier USS George H.W. Bush, which is assigned to the U.S. Navy’s Fifth Fleet, based in Bahrain. Saudi Arabia has agreed to host training facilities for Syrian rebels on its territory.

It remains unclear how much of a military role the countries will play from here on. Their participation may turn out to be token, the Stratfor analysts said — or “these airstrikes could develop into a small but growing assertiveness among the region’s Arab monarchies.”

However, Saudi Arabia and its allies are looking beyond just striking the extremists. They want to pressure Iran and eventually turn the campaign against Assad, whose ouster they seek, said Mustafa Alani, an expert on security and terrorism at the Geneva-based Gulf Research Center.