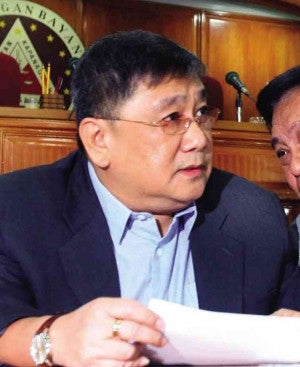 MANILA, Philippines–A recommendation for the dismissal of Sandiganbayan Associate Justice Gregory Ong has been made to the Supreme Court after an investigation ordered by the high tribunal confirmed his close ties with Janet Lim-Napoles, the alleged brains behind the P10-billion pork barrel scam.

Among the findings is that Ong allowed himself to be Napoles’ contact in the Sandiganbayan and he accepted money from her for fixing a case to benefit her.

The Supreme Court entrusted to Gutierrez in January the task of looking into Ong’s ties with Napoles as alleged by two key whistle-blowers in the pork barrel scam.

Ong chairs the Sandiganbayan Fourth Division, which acquitted Napoles in 2010 in the questionable purchase of 500 Kevlar helmets by the Philippine Marines.

“Respondent, by his serious transgressions, has impaired the image of the judiciary to which he owes the duty of loyalty and obligation to keep it at all times above suspicion and worthy of the people’s trust,” Gutierrez said in her May 15 report to the high court.

Judicial office demands the best people in the service and thus, the Supreme Court “will not hesitate to rid its ranks of undesirables,” she added.

“[I]t is respectfully recommended that respondent Justice Gregory S. Ong be found guilty of gross misconduct, dishonesty and impropriety, all in violation of the New Code of Judicial Conduct for the Philippine Judiciary and meted out the penalty of dismissal from the service with forfeiture of all retirement benefits, excluding accrued leave credits, and with prejudice to reemployment in any government office, including government-owned or -controlled corporations,” she said.

The 34-page report and recommendation, a copy of which was given to the Inquirer, gave much credence to the testimony of whistle-blowers Benhur Luy and Marina Sula that Gutierrez described to be “instantaneous, clear, unequivocal, and carried with it the ring of truth.”

Gutierrez said Ong was unable to back up with evidence his rebuttal of the testimonies against him by Luy and Sula and as such, his own testimony was hearsay.

Ong was ordered investigated by Chief Justice Maria Lourdes Sereno on Oct. 7, 2013, after Luy and Sula disclosed the ties between Napoles and Ong in the Senate blue ribbon committee hearing on the pork barrel scam on Sept. 26, 2013.

At that hearing, Luy said Napoles had told him that she was able to fix her case at the Sandiganbayan because she had a contact there, but he did not identify the person at that time. Sula told the same hearing that Napoles knew Ong.

Luy and Sula testified in the investigation being carried out by Gutierrez on Feb. 12 and elaborated on their statements at the Senate.

In his testimony, Luy said the “Napoles’ ‘connect’ with the Sandiganbayan is respondent (Ong).”

He said that since they were cousins, Napoles spoke to him about the developments in her Sandiganbayan cases and that she talked about them with Ong, whom she claimed was introduced to her by Sen. Jinggoy Estrada.

Estrada is now detained in Camp Crame, awaiting trial in the Sandiganbayan on plunder and graft charges over the pork barrel scam.

Luy testified as well that even before the decision in the Kevlar case was promulgated, Napoles and Ong were communicating with each other and that the businesswoman was sure she would be acquitted in both cases.

Asked to elaborate on his Senate testimony that he knew Napoles fixed the Kevlar case, Luy said he kept a ledger for the Sandiganbayan case in which he listed all of Napoles’ expenses, which amounted to P100 million.

Luy said Napoles had told him that she gave various amounts to different people during the pendency of her cases.

He said Napoles had also told him that she gave money to Ong, “but she never mentioned the amount.”

Luy also said he met Ong in 2012 when he visited Napoles’ office twice at Discovery Suites Center in Ortigas, Pasig City. Napoles introduced Ong to her staff during his first visit there, Luy said.

Luy said Napoles had told him Ong wanted to avail himself of the 13-percent annual interest offered to those like Napoles who placed their money in the Armed Forces of the Philippines and Police Savings and Loan Association Inc. (AFPSLAI).

She said Ong gave him a check for P25.5 million and that she would deposit it in her personal account and issue checks to him, Luy said.

Gutierrez quoted Luy’s account in her report to the Supreme Court.

Elaborating on her Senate testimony that Napoles had told her that she expected a temporary restraining order (TRO) from the Sandiganbayan, Sula said the TRO was going to be issued in the event the pork barrel scam case against her was filed in the antigraft court.

Sula said Napoles assured her and the other members of her staff not to worry about the pork barrel scam case because she had contacts in the Office of the Ombudsman and in the  Sandiganbayan.

Sula said Napoles told her staff earlier that Ong would help her in the Kevlar case.

Gutierrez also called in Rappler reporter Aries Rufo in connection with a photograph for a story he had written and which showed Ong posing with Napoles and Estrada.

Rufo declined to identify the source of the photograph. He said he had asked Ong about it and that the justice said it must have been taken during one of the parties hosted by Estrada and he did not know that it was Napoles in the picture.

Ong, who appeared before Gutierrez on March 12, denied the allegations, saying he did not meet with Napoles during the pendency of the Kevlar case.

Ong denied that he fixed the Kevlar case, saying the decision was made by the three-member division as a collegial body.

Ong admitted that he went to see Napoles twice in her office in March 2012 or two years after the Kevlar case was promulgated.

Ong said he met Napoles a month earlier at the birthday party of Estrada and that she thanked him for her acquittal in the Kevlar case.

As to Luy’s claim that Napoles paid him advance interest, Ong denied he issued a check for P25.5 million to her and said he had no intention to invest in AFPSLAI.

He dismissed as false and without basis the Rappler story’s insinuations, including his alleged closeness to Napoles even during the pendency of the Kevlar case.

Gutierrez said she found the statements of Luy and Sula consistent with their Senate testimonies and that they “did not waver or falter” during cross-examination.

“The undersigned found [Luy and Sula] credible witnesses and their story untainted with bias and contradiction, reflective of honest and trustworthy witnesses,” Gutierrez said in her report.

Gutierrez said she found “unmeritorious” Ong’s claim that Luy and Sula were lying.

“With the undersigned’s finding that there is credence in the testimonies of [Luy] and Sula, there is no need to stretch one’s imagination to arrive at the inevitable conclusion that in ‘fixing’ the Kevlar case, money could be the consideration,” she said.

Gutierrez said Ong asked during the hearing if Napoles could be subpoenaed for questioning on Luy’s and Sula’s testimonies, which he described as hearsay and inadmissible as evidence.

But Gutierrez noted that Ong and his lawyer did not file a motion to subpoena Napoles at the hearing and did not present her to rebut Luy’s and Sula’s testimonies.

“Significantly, [Ong] failed to consider that his testimony is likewise hearsay,” she said, adding that Ong should have presented Napoles and Ramirez to back his own claims.

Gutierrez said Ong’s act of “allowing himself to be Napoles’ contact in the Sandiganbayan, resulting in the fixing of the Kevlar case and of accepting money from her, constitute gross misconduct….”

Gutierrez said she believed Luy’s charge that Ong received money from Napoles because it was Luy who prepared the checks.

She also said that while Ong claimed he visited Napoles to thank her for a favor from Ramirez, it was also possible he could have transacted business with her, as she wondered why Napoles would pay Ong an advance on interest “if it were not a consideration for a favor.”

“Indeed, respondent should not stay in his position even for a moment,” she said.

Also constituting gross misconduct was Ong’s visits to Napoles’ office, according to Gutierrez, who said his position demands that his personal behavior should be “beyond reproach” both inside and outside the court.

Ong committed acts of impropriety in joining Napoles and Estrada in picture-taking, she said.

Gutierrez said Ong’s explanation that he did not know Napoles then because she never appeared during the hearings on the Kevlar case had no merit.

She mentioned in her report that this was the second administrative complaint against Ong, the first being when the Supreme Court found him guilty of violating Sandiganbayan rules and the law “for nonobservance of collegiality” in hearing cases in Davao City.

Noting that the Supreme Court had not tasked her to touch on the merits of the Kevlar case, Gutierrez said she could not “hold back her skepticism” about Napoles’ acquittal in that case.

She questioned why Ong’s division acquitted Napoles on grounds that she did not conspire with the suppliers and was not one of the dealer-payees when its ruling showed that she followed up the processing of the documents, that she was in charge of delivering the helmets and that the checks for payment of the P3.8 million helmets were deposited and cleared in her bank account.

“Considering this glaring irregularity, it is safe to conclude that indeed respondent has a hand in the acquittal of Napoles. All along, the whistle-blowers were telling the truth,” Gutierrez said.