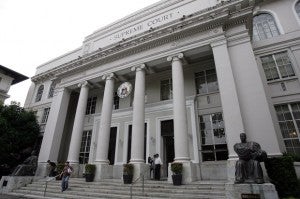 In a unanimous vote, the high court shot down the petition of former Camarines Sur Gov. Luis Raymund Villafuerte Jr. that sought to nullify three issuances by the late interior secretary requiring the publication of local government finances on their official websites.

“The assailed issuances… are but implementations of the avowed policy of the state to make public officials accountable to the people,” the high court said, adding that the memos were “issued to promote good governance through transparency, accountability and participation.”

The ruling also boosts the need to pass legislation that makes full disclosure an imperative, she added.

The late interior secretary, known for his “tsinelas” (slippers) style of leadership and grassroots governance, died in a plane crash on Aug. 18, 2012.

Villafuerte, who passed on his position to son Miguel Villafuerte in 2013, had sought relief before the high court in 2011, contending that Robredo’s circulars were “unconstitutional” and violated the fiscal autonomy of local government units (LGUs).

The former governor sought to have the following issuances invalidated: Memorandum Circular (MC) No. 2010-83, an Aug. 31, 2010, memo requiring the “full disclosure of local budget and finances, bids and public offerings”; MC 2010-138 of Dec. 2, 2010, on the use of 20 percent of the internal revenue allotment (IRA) allocated LGUs annually, and MC 2011-08 of Jan. 13, 2011, that requires from LGUs the full disclosure of IRA disbursements, bids and public offerings.

The high court said it was “inconceivable… how the publication of budgets, expenditures, contracts and loans, and procurement plans of LGUs… could have infringed on local fiscal autonomy.”

The Supreme Court also upheld the national government’s exercise of supervisory powers over LGUs if only to make sure that their programs are “consistent with national goals.”