At least 800,000 people affected by Typhoon “Ruby” (international name: “Hagupit”) remain in evacuation centers three days after the typhoon exited the country, according to official reports.

The National Disaster Risk Reduction and Management Council (NDRRMC) reported that some 170,000 families or 788,487 individuals are still in government-designated shelters as of Friday, Dec. 12.

Most of them, or close to 600,000 evacuees or about 125,000 families, are in the Eastern Visayas region which bore the brunt of Ruby’s onslaught and that of Supertyphoon “Yolanda” only a year ago, with Eastern Samar registering the most number of evacuees at 125,432. 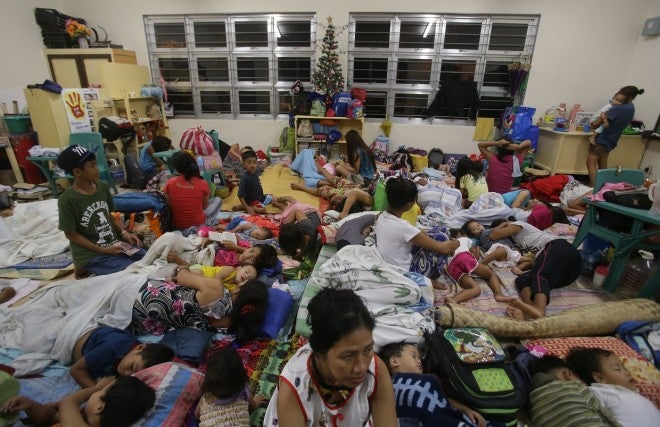 Families seek refuge at a school used as an evacuation center as they prepare for Typhoon Hagupit in Legazpi, Albay province. AP

The other evacuees are in Mimaropa (Mindoro-Marinduque-Romblon-Palawan), with 61,457 evacuees; Bicol with 25,856 evacuees; Calabarzon with 18,586 evacuees, and a few hundreds in Central Luzon, Western Visayas and the Caraga region.

Although reports on casualties and damage are still trickling in, the NDRRMC confirmed that at least 19 persons were killed and at least 916 others injured when Ruby lashed the country from Dec. 6 to 9.

Ruby was close to being a supertyphoon when it slammed into Eastern Visayas on Dec. 6, and progressively weakened as it hit Bicol and the Southern Tagalog regions. It regained strength when it reached the West Philippine Sea on Dec. 9.

As of Dec. 12, the NDRRMC confirmed that Ruby damaged at least P3.3 billion worth of agriculture and infrastructure in the Calabarzon, Mimaropa, Bicol, Western Visayas and Eastern Visayas regions.

The NDRRMC said 12 provinces in Bicol, Central Visayas and Eastern Visayas are still experiencing power outages, although telecommunication signals were almost fully restored in the affected regions. All classes have resumed except in Borongan City, Eastern Samar, the NDRRMC added.

Meanwhile, a lawmaker from Eastern Samar made a plea for more donations from big corporations, saying that so far, only local and international NGOs have been active in the rehabilitation phase of areas hit by Ruby.

“Are big corporations suffering from donor fatigue?” Rep. Ben Evardone asked, adding that although Ruby was not as strong as Yolanda, the typhoon still caused considerable damage across the central Philippines. With a report from DJ Yap