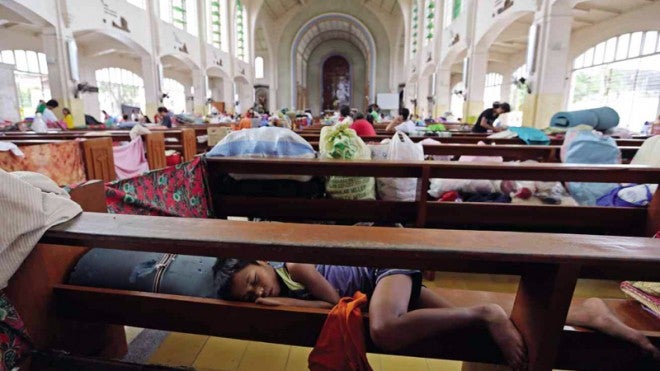 REFUGE IN THE HOUSE OF GOD A child uses a pew as a makeshift bed inside the Redemptorist Church in Tacloban City where residents evacuated ahead of the landfall of Typhoon “Ruby” (international name: Hagupit) in the Visayas. The typhoon threatens to whip up storm surges in the disaster-weary central Philippines that, a year ago, was flattened by Supertyphoon “Yolanda.” RAFFY LERMA

TACLOBAN CITY—The two-story house of Rufino Garado in Guiuan town, Eastern Samar province, has yet to be fully repaired after it was damaged by Supertyphoon “Yolanda” (international name: Haiyan) last year. But he opened his home in Barangay 9-A to at least 20 families whose houses are made of light materials and can be destroyed by Typhoon “Ruby” (international name: Hagupit).

“The roof and windows of our house were damaged during Yolanda but it can still serve as an evacuation center for our neighbors,” Garado, 54, said. “We want to help the people in our community.”

His brothers Virgilio and Danilo also opened their houses to their neighbors who were seeking shelter from the storm, which was expected to hit land in Borongan City, Eastern Samar, on Saturday afternoon.

Guiuan Mayor Christopher Sheen Gonzales said he had asked residents whose houses survived the wrath of Yolanda to allow their houses to be used for evacuees this time.

Gonzales said there were few evacuation centers in Guiuan because the schools and barangay halls were either damaged or destroyed by Yolanda when it struck the town on Nov. 8, 2013.

“We have identified about 100 houses that can serve as temporary evacuation centers for the families whose houses are made of light materials or still living in temporary shelters,” Gonzales said.

At least 3,000 families living in coastal areas of the town were preemptively evacuated by the Guiuan municipal government to these private homes starting Wednesday night.

They were among the tens of thousands of people who fled coastal villages and landslide-prone areas in central Philippines as Ruby bore down on Eastern Visayas, where Yolanda killed more than 6,300 people last year.

But in Tacloban City, Leyte province, more than 300 families living in bunkhouses in Sagkahan district had yet to move to evacuation centers on Friday.

Sarah Tabletin, 48, said her family might move to the nearby Chinese cemetery for shelter during the storm.

“There are no big trees inside the cemetery and we will just take shelter inside the mausoleums there, Tabletin said.

Tabletin’s family used to live in Barangay 88 in San Jose district, worst hit area in Tacloban during Yolanda. She lost two of her six children and two granddaughters in the supertyphoon.

Gloria Fabregas, chief of the city’s Social Welfare and Development Office, said about 4,240 families composed of 19,300 people had been moved to 26 evacuation centers in Tacloban.

Most of the evacuees were staying in the astrodome, which can accommodate 3,500 people and has been declared safe by the International Organization for Migration.

In the downtown area, many businesses have closed down since Wednesday, when the first reports that Ruby was headed toward Eastern Visayas came.

The glass windows of stores were covered and boarded up while policemen and Army soldiers were deployed to prevent looting.

Before the closures, thousands of people lined outside the stores to stock up on emergency provisions.

Leyte Gov. Leopoldo Dominico Petilla said the panic buying was a good sign because it indicated that the people had learned lessons from Yolanda.

“If there is no panic buying, I guess I can say that they have not learned any lesson from last year’s typhoon,” Petilla said.

As Ruby approached, people started to crowd the evacuation centers in several towns and cities in the Visayas.

In Capoocan town, Leyte, at least 1,000 families from three coastal villages had been moved to higher grounds, said its mayor, Federico Carolino.

More than 4,000 people were moved to evacuation centers in the cities of Bogo and Cebu and in the northern towns of Daanbayantayan, Bantayan and Madridejos.

The Philippine Coast Guard suspended sea travel in the Visayas on Friday.

Boat trips were suspended   to and from the island-resort of Boracay, Aklan province, after the Public Storm Signal No. 1 was raised in the province.

In Albay province, residents have been evacuated from landslide-prone villages.

Albay has the most number of landslide-prone villages, 317, among the six provinces in the Bicol region that have high chances of landslides during storms.

Albay Gov. Joey Salceda gave assurance that this time there would be “zero casualty” unlike when Typhoon “Reming” (international name: Durian) hit the country, killing more than a thousand people in the province in November 2006.

He said the evacuees would come from 720 villages in the three cities and 15 towns of Albay that are vulnerable to flash floods, landslide and lahar flow from Mayon Volcano.

In Catanduanes, residents in 15 coastal villages were evacuated after officials noted a rise in wave heights along the coastlines early in the morning.

In Camarines Sur province, Gov. Miguel Luis Villafuerte said the evacuation of families living near the shoreline of Ragay Gulf had begun.

In Surigao del Sur province, Gov. Johnny Pimentel suspended work in government offices on Friday, except in the disaster council.

Classes on all levels were suspended in Tandag City, Bislig City and the towns of Cantilan, Bayabas, Cagwait, Lingig and Tagbina.

The National Food Authority (NFA) in Surigao del Sur province said its warehouses had gone on 24-hour operation to ensure that there would be no rice shortages during the storm.

NFA Assistant Provincial Manager Alvin Balatero said that of the 17 municipalities and two cities in Surigao del Sur, only the towns of Tago and Cortes had asked to be given access to rice supplies should their stocks run short.

In Dinagat Islands, 25 evacuation centers in different municipalities have been opened to 2,361 families or 11,805 people.

With at least 5,000 food packs initially prepositioned for the evacuation centers, the Dinagat Islands local government said the evacuees would have enough to eat.

In Agusan del Norte province, evacuation centers have already started to receive residents while relief and rescue vehicles and equipment have been prepositioned for deployment.

The military’s Eastern Mindanao Command based in Davao City, has been directed to prepare and initiate efforts to assist local disaster councils.