MANILA, Philippines — “Next year, I will either be your president or I shall be dead…” was how cancer-stricken Senator Miriam Defensor-Santiago greeted the media on Friday after attending a speaking engagement in Makati City.

Turning serious, Santiago said she is expecting to be attacked now that she ranked third in the latest Pulse Asia presidential preference survey conducted from Nov. 14 to 20.

“Big deal,” was the senator’s initial reaction when asked about her ranking in the survey.

“I’m already a battered veteran in politics so these things are not able to shake my equanimity. There’s still more than a year before the elections,” she further aid when asked if her ranking has encouraged her more to consider running for president in 2016. 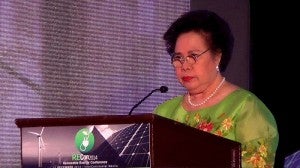 But Santiago considers being Number 3 a “good place to be, saying that the two frontrunners in the surveys “will fight it to death.”

“They will try and destroy each other to get the other out of the way. Plus there’re other presidentiables who may not be even be rating but who start their campaigns in the belief that the best defense is offense,” she said.

“So I can already, on the basis of my past experiences, expect to be attacked (for the) many things that (have) nothing to do with the national welfare simply because that’s how some candidates like to campaign,” she added.

This early, however, the senator said the survey results did not signify anything since the people who ranked in the polls were just the names that came up to mind when a person is asked about the presidency.

“When the situation heats up, then you can begin to see dramatic changes in the lineup,” she said.

In the case of Vice President Jejomar Binay, whose ratings fell from 31percent in September to 26 percent, Santiago predicted that the number would further go down.

Binay though remained the Number 1 choice for president based on the latest Pulse Asia survey.

“Bababa s’ya nang bababa dahil ((his ratings) will go down further because) there’s no good news in the future for him,” Santiago said of Binay as she expects corruption allegations against the Vice President to eventually reach the masses.

In the case of Senator Grace Poe, who ranked second with 18 percent, Santiago the survey only showed that she was coasting on the reputation of her father, the late actor Fernando Poe Jr.

The elder Poe ran but lost to former President Gloria Macapagal-Arroyo in the 2004 presidential race.

“We’ll see whether the electorate will become more demanding of Grace and begin to judge her for factors other than her lineage,” Santiago said.

Asked about her own plans of joining the presidential race in 2016, Santiago said: “My doctor will decide that question,” followed by a hearty laugh.