MANILA, Philippines–With no legal leg to stand on, the country’s top cop has finally acknowledged that he has to let go.

Efforts by Director General Alan Purisima of the Philippine National Police to hold on to his job crumbled after he failed to get from the Court of Appeals an immediate temporary restraining order (TRO) against his suspension.

The Court of Appeals instead ordered the Ombudsman Wednesday to explain why Purisima should not be granted the TRO.

Purisima told Interior Secretary Mar Roxas that he would respect the order issued by the Office of the Ombudsman suspending him for six months. 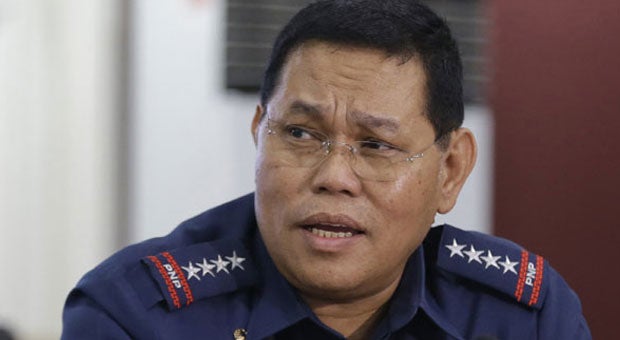 Purisima, one of President Aquino’s closest friends in the government, was suspended for six months without pay by the Ombudsman last week over a multimillion-peso contract that the PNP awarded to a nonaccredited courier service firm for the delivery of gun licenses in 2011.

In Borongan City, Eastern Samar province, Roxas on Wednesday maintained that he was authorized to implement the suspension order.

Speaking with reporters, Roxas said he phoned Purisima as soon as the telecommunications service was restored in this city on Tuesday and informed the PNP chief that he would implement the Ombudsman’s order.

Roxas, who flew to Borongan to lead the government’s response to Typhoon “Ruby,” said Purisima acknowledged his authority as interior secretary and vowed to respect the order.

During their brief conversation, Roxas said he told the PNP chief that Deputy Director General Leonardo Espina would take over the leadership of the 150,000-strong force as officer in charge being the next most senior police official.

“I’m just implementing the Ombudsman’s order which was addressed to me as secretary of the DILG (Department of the Interior and Local Government),” Roxas said after the meeting of the Provincial Disaster Risk Reduction and Management Council.

The Ombudsman had tasked the DILG with implementing its suspension order.

Asked what else they talked about, Roxas said: “I just told him there’s nothing personal and this is just part of my job. He said, ‘Yes sir. I understand.’ So the next thing we discussed was about the OIC of the PNP.’”

He said his decision to enforce Purisima’s suspension should not be an issue because it was just an “ordinary course of business” in the DILG, pointing out that he had also implemented similar orders from the antigraft body in the past.

“This is just a regular part of my job. There should be no drama or complications,” he said.

Told that Purisima’s lawyer was questioning his authority to implement the order, Roxas argued that he was also the concurrent chair of the National Police Commission (Napolcom) being the head of the DILG.

“I think that’s just part of the legal tactics of his lawyers. It’s better if they address that issue with the Ombudsman,” he said.

Last Friday, a day after the Ombudsman ordered the preventive suspension of the PNP chief and other police officials, Purisima’s camp filed in the Court of Appeals a petition to stop the implementation of the suspension order.

Purisima’s lawyer, Kristoffer James Purisima, earlier released a statement saying the DILG implementing the Ombudsman order was “patently illegal” because under the Constitution the PNP was under Napolcom’s administrative control and not the DILG.

At a press conference at the PNP headquarters on Wednesday, the lawyer reiterated: “We don’t recognize what the DILG served because legally speaking, it should be the Napolcom… Perhaps there was just a confusion because the DILG secretary is also the ex-officio chair of the Napolcom.”

“The PNP chief is entitled to all legal remedies available to him. Just because this is a politically charged case doesn’t mean he has less rights. He has every right to question orders he thinks are wrong or illegal,” the lawyer said.

Sen. Grace Poe acknowledged that Purisima had the right to challenge the Ombudsman’s suspension order.

But the senator said it would be more prudent for Purisima to comply with the order from an independent body like the Office of the Ombudsman.

“The Ombudsman has spoken. All agencies of government fall under the order of the Ombudsman,” she told reporters in the Senate. “Let’s think of the institution first before self.”

“We should follow the law, and the Ombudsman has ordered that he go on leave,” Poe added.

In a resolution, the Court of Appeals Special 10th Division directed Ombudsman Conchita Carpio Morales “to file comment and to show cause” why the country’s top cop should not be given a TRO to lift his six-month suspension.

The appellate court’s response came after Purisima filed a petition for a TRO, status quo ante order and/or writ of preliminary injunction to lift his suspension that took effect last week.

“Without necessarily giving due course to the petition, this court hereby directs the respondent to file comment thereto and to show cause, why the application for a TRO and or writ of preliminary injunction should not be granted, within a non-extendible period of 10 days from receipt,” said the resolution penned by Associate Justice Jane Aurora Lantion.

It said action on Purisima’s petition would be “held in abeyance pending submission” of Morales’ comment.

The Ombudsman issued the order on Dec. 3, while Purisima was in Saudi Arabia on official travel.

Purisima is also facing two separate plunder complaints in the Office of the Ombudsman for his alleged hidden wealth, including his property in Nueva Ecija province and the renovation of the PNP chief’s “White House” in Camp Crame.

In his plea before the court, Purisima said Morales had “acted with grave abuse of discretion amounting to lack or excess of jurisdiction when respondent ordered the preventive suspension of petitioner,” citing lack of evidence to support the case against him.

“With all due respect, it is clear and undeniable grave abuse of discretion amounting to lack or excess of jurisdiction for respondent to order petitioner’s preventive suspension on the mere reliance on assumptions, conjectures and suppositions that have no merit whatsoever,” said the PNP chief’s petition.

Purisima said he “is prevented from discharging his official duties and earning his lawful income on the strength of unsubstantiated allegations precisely begs and necessitates the immediate intervention of the honorable court to protect the constitutional rights of petitioner in the face of the whimsical and capricious actions undertaken by respondent.”

Purisima defended the questioned contract, saying he merely signed a Feb. 12, 2013, memorandum on Werfast’s accreditation as a ministerial duty.

He said that he approved only the mandatory use of a courier service to deliver firearms license cards, and not the firm itself.

Purisima added that he relied on the good faith of his subordinates in approving the memo, and that he was “not obligated to personally verify” its content.

The fact-finding bureau found out that the PNP entered into a memorandum of agreement with Werfast Documentary Agency Inc. despite its nonaccreditation. It turned out that Werfast was incorporated only after the signing of the MOA.

The Ombudsman’s fact-finding team also found that Werfast had no capability to deliver gun licenses. So it contracted the services of LBC and charged gun owners P190 for deliveries in Metro Manila and P290 in the provinces. LBC was charging its clients only P90 for the service, according to the Ombudsman.

“The implementation of the [suspension] despite the absence of substantial evidence and with grave abuse of discretion would result in petitioner’s unsullied reputation in public service being unduly tarnished and besmirched by an administrative charge that is without basis in fact and in law,” said Purisima.–With a report from TJ Burgonio