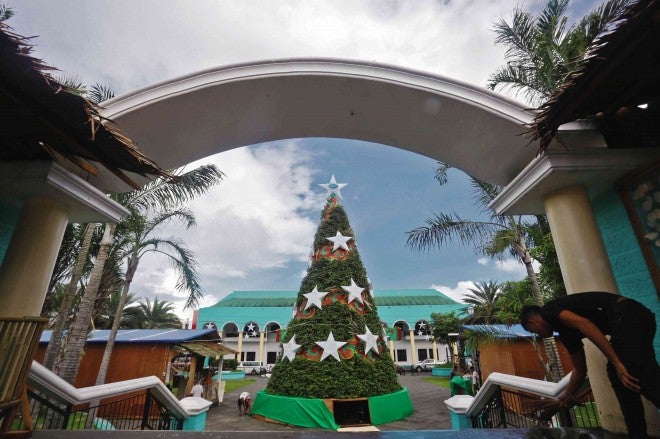 GOING GREEN A 40-foot Christmas tree made from 3,000 bags of camote tops is displayed at Peñaranda Park in front of the provincial capitol of Albay. MARK ALVIC ESPLANA

Albay is going camote this Christmas. A 40-foot Christmas tree layered with 3,000 black nursery bags of camote (sweet potato) tops and adorned with huge white lanterns and lights has been put up at Peñaranda Park in front of the provincial capitol in Legazpi City, ushering in the monthlong holiday celebration in the province.

Known as Karangahan Festival, the celebration features indigenous materials as a way of raising awareness on a clean and green environment, according to Gov. Joey Salceda. Karangahan was coined from the Bicolano root word ranga, meaning endearment, and when used to refer to the festival, it means “endearment to culture, arts and nature.”

For its Christmas tree in 2011, the first time the festival was held, the provincial government used empty fuel drums. In the next two years, it tapped pili saplings and coconut shells.

This year’s tree design on frames of coconut lumber highlights Albay as the top camote-producing province in the Bicol region and the second in the entire Philippines, next to Pampanga province.

Since the first week of November, the provincial engineering office, which is in charge of installing the camote Christmas tree, had been coordinating with one of the sweet potato farmers in Sto. Domingo town to prepare the leaves for the decoration, according to its employee, Famirose Eva.

The project was conceptualized by Manny de Vera, a provincial employee, Eva said.

Last week, the Christmas tree was dismantled as the province braced for the onslaught of Typhoon “Ruby.” After the storm, Salceda ordered the tree reassembled on Monday afternoon, in time for the opening of Karangahan on Wednesday. The festival’s launch was earlier set on Dec. 5.

A culinary event showcasing the various ways of preparing camote—fried as “camote cue” (fritters), boiled or processed as ice cream—was expected to be held that day.