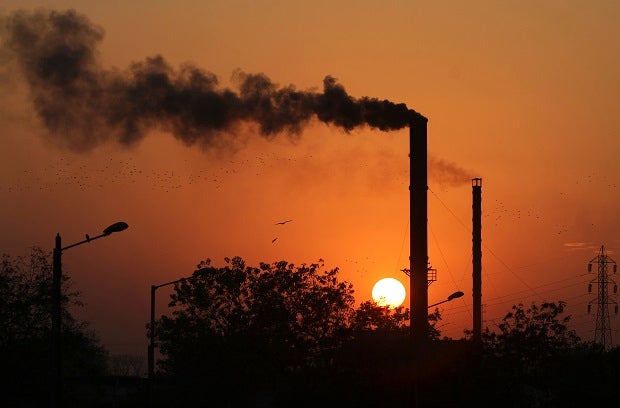 Birds fly past at sun set as smoke emits from a chimney at a factory in Ahmadabad, India, Monday, Dec. 8, 2014. The momentum from a historic U.S.-China pact to resist global warming is showing signs of fading at the U.N. climate talks in Peru as the familiar rich-poor conflict persists over who should do what to keep the planet from overheating. The conference’s high-level phase begins Tuesday. AP

LIMA, Peru – Rich countries have pledged more than $10 billion in climate aid for poor economies, a psychological threshold at UN global warming talks in Lima, according to a tally compiled by AFP Tuesday.

Finance is a touchy issue at the negotiations, where developing countries — led by China — want wealthy economies to spell out their promised support as a sign of good faith in negotiations to forge a global climate pact by December 2015l.

The $10-billion level was exceeded when Australia promised Aus$200 million ($166 million, 134 million euros) and Belgium 51.6 million euros at a ministerial meeting in the Peruvian capital.

The pledges are for the brand-new Green Climate Fund (GCF), the main vehicle for channeling financial aid to poor nations.

The money will be used to help shore up the defenses of climate-vulnerable countries and help them reduce their carbon emissions.

“These contributions should build trust in the negotiations and propel action to a global agreement,” said Athena Ballesteros of the World Resources Institute (WRI), a US think tank.

“The time has come to bring real scale to climate finance,” she said. “Now we need urgency, conviction and scale.”

Australia said its funding would be allocated over four years.

The pledge follows the United States contributing $3 billion, Japan up to $1.5 billion and France and Germany a billion dollars each to the UN fund.

One of the world’s wealthiest countries, Australia has come under fire from green groups for its use of coal-fired power and its per-capita carbon pollution — among the highest in the world.

At a three-hour ministerial session on climate finance, developing countries agreed Tuesday that pledges so far were good news, but they needed to be more predictable.

The Association of Small Island States (AOSIS) called for “robust information” on public aid on an annual basis, and a “common reporting format.”

“Before we leave Lima, we need that assurance,” it said.

Chinese top negotiator Xie Zhenhua said pre-2020 pledges so far were “a positive signal, which should be fully acknowledged as good news… but there is still a big gap.”

“The Lima conference should draft a clear roadmap on finance by the developed countries by 2020 by specifying the annual amount of public finance by each developed country and scaling it up every year, taking into account the needs of developing countries,” said Xie.

US chief negotiator Todd Stern struck a different note, saying donors “are on their way” to meeting the 2020 commitment and arguing that public funds were just a part of overall financing needs.

“Best estimates suggest there is plus or minus $40 billion of public funds flowing internationally already, and that doesn’t even count private investment mobilized by that money or by related public policy,” said Stern.

“The $100-billion commitment was always based on public and private. Our joint goal should be a major effort to drive investment to lower emissions, development and growth, that is where the big opportunity lies.”

Climate change plans to get P136B to ensure spending transparency