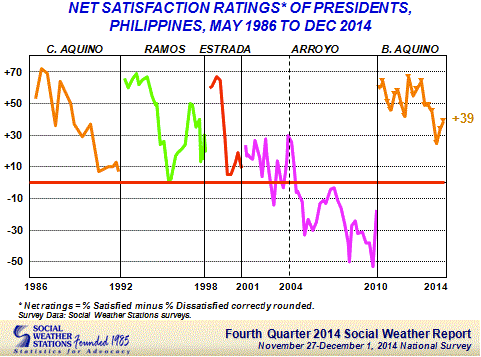 Aquino achieved a net satisfaction rating of +39 (63 percent satisfied, 24 percent dissatisfied and 14 percent undecided) based on the SWS survey conducted among 1,800 respondents from November 27 to December 1.

The said rating is considered “good” based on SWS rating classification (+30 to +49). 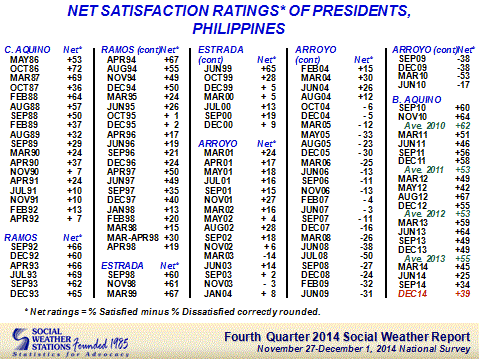 Aquino continued to enjoy relatively favorable ratings in Mindanao with 66 percent saying they were satisfied with his performance. Only 20 percent said they were dissatisfied and 14 percent remained undecided (resulting in a +46 net satisfaction rating).

On the other hand, the National Capital Region posted the lowest net satisfaction rating at +23 (55 percent satisfied, 31 percent dissatisfied and 14 percent undecided).

While the rest of Luzon had a relatively low net satisfaction rating for Aquino, it was a big improvement compared with the earlier quarter. It increased to +39 in December from only +29 in September.

Visayas, like Mindanao, also had a “good” net satisfaction rating for Aquino at +42 (66 percent satisfied, 24 percent dissatisfied and 10 percent undecided) in December, a slight decline from +43 in September. 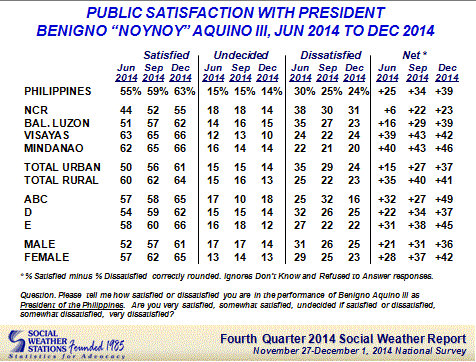 Aquino’s net satisfaction rating showed a substantial improvement among the Class ABC from only +27 in the third quarter to +49 this month. It showed a slight increase for both Class D (now +37, from +34 last quarter) and Class E (now +45, from +38 last quarter).

The President continued to enjoy better net satisfaction ratings among women. While his rating among men was only +36 (from +31 in September), it was +42 (from +37) among women. 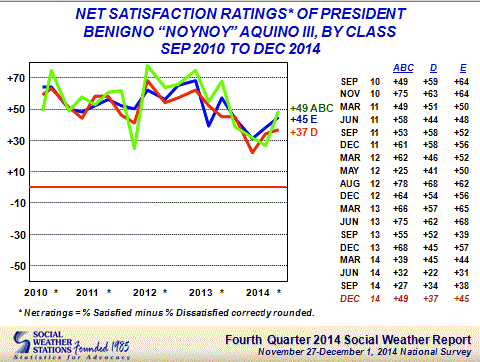