‘Harding papel’ to teach the young the truth about martial law 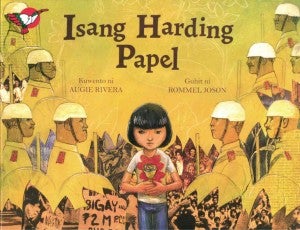 When the book “Isang Harding Papel” was launched recently at the Museo Pambata, every speaker gave voice to the fears of those who lived through, or suffered under, martial law—that people would forget those dark years in Philippine history and start believing revisionists’ rosy pictures of tyrannical rule.

But the speakers also expressed the hope that the book, a collaborative project of Adarna House Inc. and Edsa People Power Commission (EPPC), would help bring the true story of martial law to those who need to learn most and well the lessons of that infamous period—the very young who would be the future of the country.

The book was launched on November 27, birth anniversary of the late Senator Benigno “Ninoy” Aquino Jr. whose assassination lit the fuse that led to a peaceful political uprising known around the world as the Edsa People Power Revolution, which ousted a dictator and installed Ninoy’s wife Cory as President.

The date is also marked every year as Araw ng Pagbasa Day all over the country.

“Isang Harding Papel,” written by Augie Rivera and illustrated by Rommel Joson, is the true story of Jenny whose mother, Aling Chit, became a political prisoner after joining a protest rally.

Chit was in jail for seven years during martial law until the Edsa People Power Revolution of 1986 ousted a dictator and restored Philippine democracy. The book is written for a young audience ages 8 to 12.

Jenny’s little garden consists of flowers fashioned by Chit from old newspapers, which she gave the young girl during Jenny’s weekly jail visits with her grandmother. 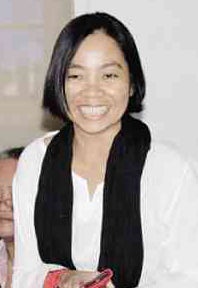 Rivera, a prolific and award-winning children’s book author, said, “Through Jenny’s story, I hope that the child reader will get curious and will want to know more about history and the conditions and struggles of children during [martial law].”

He said, given revisionist

accounts of martial law in social media, he hoped parents would use the book to start a discussion with their children about what actually happened.

“Parents should educate their children about our country’s past so that future generations will never forget. Children need to understand how real it was; that so many families were deeply affected by their loved ones’ struggle against martial law,” Joson, an award-winning artist, said. Filipinos must never forget martial law so it would not happen again, he added.

Ninoy’s daughter Pinky Aquino-Abellada said Jenny and Chit’s story was “very factual.” Even the illustrations, she said, were accurate.

Abellada mentioned specifically the thermos bottle that, she said, her father, who would have marked his 82nd birthday on Nov. 27, used to smuggle documents he wanted released to the foreign media.

“If you remove the bottom of the thermos bottle,” she said, “you could fit up to 10 pages.” 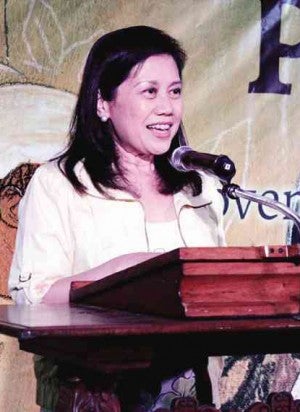 While the grandmother was the person who tried to maintain a sense of normalcy in Jenny’s household, Abellada said it was her mother who held the family together.

In the book, mother and daughter were linked by paper flowers. Ninoy’s family was linked by prayer, Abellada said. Her father and the rest of the family agreed to say the rosary every day at 8 p.m.

Abellada said, “Let’s not let this (martial law) happen again.” She called on those who attended the launch, particularly the smattering of students, to let future generations know what happened “especially with the attempts to change the past.”

Ani Rosa Almario, Adarna House vice president, said they hoped the book would help ensure that Filipinos would not forget their past, as she noted that “anyone born in the 1990s and 2000s knew next to nothing about martial law.”

Many Filipinos, she said, had chosen to forget this important part of their past when they showed great courage in defying a dictator.

Education Undersecretary Rizalino Rivera said the book was “timely and relevant.” Like the other speakers, he said the young no longer knew about Ninoy and Edsa.

“There is a need to make sure kids know about Edsa, martial law stories and the people involved. They have to [appreciate] the Filipino characters that were showcased during the People Power Revolution, and to help shape the minds of the young,” he said.

Rivera said the new kindergarten to Grade 12 curriculum included lessons about martial law, the People Power Revolution and values connected to them until senior high school.

He said “Isang Harding Papel” captured the true essence of the events during martial law and the Edsa revolution.

Felipe de Leon, chair of the National Commission for Culture and the Arts, also stressed the need to make the young understand what happened during martial law and Edsa.

He said the historic events on Edsa showed that Filipinos were not confrontational people and would prefer reconciliation and mediation. He said the people served as the bridge between the dictator and his opponents, offering flowers, food and prayer to avert a bloody confrontation.

Secretary Herminio Coloma Jr. of the Presidential Communications Operations Office said it was important in shaping the minds of future generations to know the real events behind Edsa.

During the launch, EPPC, through commissioner Cesar Sarino and executive director Maria Montelibano, presented tokens of appreciation to author Rivera and artist Joson. 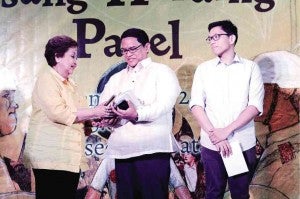 Montelibano (from left) presents tokens of appreciation to Rivera and Joson

“Isang Harding Papel” is the second in the three-children’s-book collaboration between EPPC and Adarna House Publishing.

In 2013, the partners released “EDSA” by the multiawarded writer Russel Molina and illustrator Sergio Bumatay III. “EDSA” is a counting picture book for younger children.

Both books are available in leading bookstores nationwide.