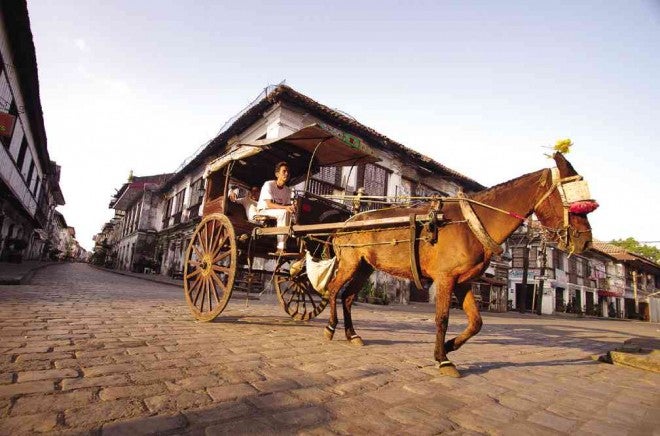 WORLD WONDER The heritage city of Vigan in Ilocos Sur province, known for its Spanish-era mansions and cobblestone streets, braces for more tourists after its inclusion in the New7Wonders Cities of the world. RICHARD BALONGLONG/INQUIRER NORTHERN LUZON

VIGAN CITY—The mood was festive in this heritage city in Ilocos Sur province from Sunday night to Monday dawn as local officials mingled with residents to await its fate in the race for the New7Wonders Cities of the world.

Some 1,200 cities from 220 countries had been nominated since the global competition, initiated by Swiss nonprofit New7Wonders Foundation, started as part of efforts to preserve the world’s manmade and natural heritage sites.

The foundation was behind the campaign that named Puerto Princesa City in Palawan province one of the world’s New7Wonders of Nature in 2011.

Traders, market vendors, students and office workers mingled with city and provincial officials. Many danced the night away as they waited for the countdown to begin before midnight.

Vigan’s new status adds value to its economy, as well as to the rest of the Ilocos region, said Divina Quemi, chief executive officer of the Nueva Segovia Consortium of Cooperatives.

“It will help us, hoteliers, because the exposure brings us more tourists and our homemade products will be given a bigger market,” said Quemi, who is also manager of NSCC Plaza Hotel in neighboring Caoayan town.

In a statement, Mayor Eva Marie Medina said: “This is inspiring. It is a tribute to a people who committed to achieve development and make wonderful things happen in their lives and their community, even radiating beyond boundaries.”

In a message posted on the group’s website, Bernard Weber, founder and president of New7Wonders, said: “[H]ere [are] seven [cities] that represent the global diversity of urban society. For the first time in human history, more than half of our planet’s population lives in cities and this election emphasizes the dramatically challenging character of our changing world.”

The contest organizer said the results would be checked, validated and independently verified. Once the process is completed, New7Wonders would work with the cities to organize official inauguration events.

The United Nations Educational, Scientific and Cultural Organization (Unesco) inscribed Vigan on the World Heritage list in 1999, citing the city for its “best practice in sustainable conservation and management of world heritage properties.”

Vigan, one of six Unesco World Heritage sites in the Philippines, has been described as the best-preserved example of a planned Spanish colonial town in Asia.