Despite jokes, a serious message for young people 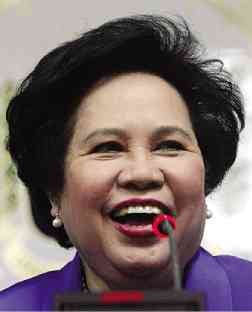 “Sabi nila kapag may cancer ka, mamamatay ka na (They say if you have cancer, you will die). What I can say is I can-cer-vive.”

To the cheers and laughter of hundreds of students, Senator Miriam Defensor-Santiago made the joke as she started her speech recently at Pamantasan ng Lungsod ng Maynila Rajah Sulayman university gymnasium.

Santiago gave the lecture for the 3rd PILLARS (Pursuit of

Integrity, Leadership, Liberty, Accountability and Stewardship) organized by the Junior Public Relations Practitioners of the Philippines.

In the standing room-only gym, students, alumni and university officials listened attentively to the lecture, proving that the “Miriam Magic”

The audience enthusiastically applauded everything the senator said, especially when she examined the “psychology of plunder.” Santiago’s lecture was on the theme “Digging into the Root of Corruption.”

Known for fighting graft and corruption, the 1988 Ramon Magsaysay Awardee for Government Service, gave the audience, particularly the students, tips on how to catch a potential plunderer through his/her own words, especially those who will run in the 2016 presidential election.

Santiago said that if a politician claims, “I am not abusing the people’s money but I am using what is due to me and intending to distribute it among my constituents,” one could be sure the politician would steal given the chance.

“Watch out for weak moral identity and primitive moral thinking exhibited by the candidate who values personal loyalty over formal rules and does not distinguish between organizational and personal goals,” she said.

She said that in the 2013 Corruption Perception Index, despite the “plethora of laws” against corruption, the Philippines still ranked 94th among 117 countries.

“It will surprise you to know that, in all of Asia, one country has the highest number of anticorruption measures—this country is the Philippines,” she said. “The Philippines was among the first countries to ratify the United Nations Convention against Corruption in 2006. Yet, it is estimated that the Philippine economy loses at least 20 percent of our annual national budget to corruption.”

She said local and national public officials got involved in corruption because relevant laws were not always applied.

The senator told her audience that the next president should have the political will to fight corruption by promoting transparency and access to information, raising the wages of government employees and providing protection to whistleblowers.

She encouraged the students to help fight the culture of corruption by helping inform voters about candidates’ character and promoting a change in the system and structures with the use of social media.

“With so many pending cases of plunder and corruption against high profile political leaders, common sense dictates that, as scholars, we need to examine the culture of corruption: its sources, mindsets and whether the candidates we vote for present profiles of corruption, as a work in progress,” Santiago said.